Wesley - From prose to comic

My short zombie story, Wesley, is making the change from just a prose story to an AWESOME comic/graphic story.

Rachel Pandich, kick-butt comic author and coordinator, is is putting together a horror comic anthology, Skin Crawling Comics and Wesley is in! I've read and enjoyed comics and graphic novels for a long time, but never knew how much work went into them. First of all, the story had to be converted into a 'script,' which is exactly what it sounds like. Since the author has to explain to the artist what the readers should be seeing, it ends up being just like a script. That was a learning experience for me.

My artist, Aaron Hazouri, is freaking AMAZING, and the next step in the process after rewriting my story as a script was for Aaron to create 'pencils,' the first rough-draft drawings for the comic. Here's a sample of his fantastic work, the first drawing of the main character, Wesley: 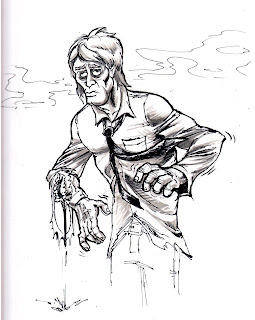 There's still a lot of work to do, but I'm so excited to be a part of this project. There are some insanely cool people involved, and I believe another zombie story or two, along with some other really scary and skin-crawling stories. I'll keep everyone updated with new picture and release dates!