Sabrina's Word Wednesday #1 Zombie, what else?

Every Wednesday I'll post a word or phrase that zombie fans either already know, or definitely should. There's almost an entire language of zombie-related idioms, and it keeps growing with each new game, movie, book, and comic book.

So let's start with the basics. The most important word in the entire zombie-related lexicon is.....

Told you we were starting with the basics. Anyway, what we think of zombies now are "undead" people, corpses who have been reanimated, either because of some awful virus (28 Days Later, Dawn of the Dead, etc) or some supernatural or magical means (Dead Before Dawn), and can sit anywhere on the spectrum of uncoordinated, lumbering, body-part dropping, green-skinned zombies to extraordinarily fast, insanely angry, and inhumanly strong zombies.

But the word zombie actually is an evolved version of the older Haitian word zonbi and the African word nzumbe. In both languages, it was used to describe someone who was either dead and reanimated by witchcraft, or someone who was nearly comatose, answering to no one except for one master, again by witchcraft. 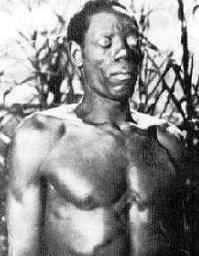 In some cultures, zombies are still feared and believed to be real; witches or shaman supposedly punish the wicked by turning into zombies and making them slaves. There is even some possible evidence that certain herbs and ingredients can create a zombie-like effect on its victims.

Folklore (with possible truth to it) usually finds its way into contemporary fiction, and George Romero took the obscure idea of zombies and turned them into a household word with his 1968 movie Night of the Living Dead. Zombies were put on the silver screen and made famous in all their shuffling, moaning, brains-eating glory. Since then, zombies have become a pop-culture phenomenon, lately rivaling even vampires. Even the sparkling ones. 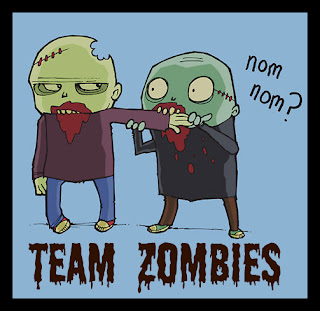 So, regardless of whether they are fast, slow, smart, dumb, downright vicious, or mildly pesky, the word zombie has come to encompass much more than just a voodoo'd slave.

Luckily, no matter what the word technically means, so far it has all been fiction... So far.

Leave a comment with a book, show, movie, comic book, or game about zombies that actually has the word "zombie" in its title. There's not as many as you'd think!