and THE MACABRE MIND OF LORI R. LOPEZ.  We're featuring a look at      one of the stories, "HEARTBEAT." 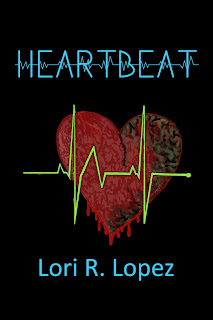 * Can the living and the undead co-exist in peace? A zombie defender must question his principles when a hunter is infected by the zombie plague and threatens the boy's mother in "Heartbeat

."
* "Unleashed" - Would the tormented pet of a psycho, after witnessing countless abominations, begin to exhibit disturbing behavior?
* "Beyond The Stump" - a dark, harrowing tale of a young woman who must assume her mother's role of Gatekeeper.
* "Nuance" unfolds the humorously poignant Cinderfella tale of a spooky carnival and a misfit who discovers the truth behind his sorry circumstances.
* "Bedeviled" reveals a trail of madness featuring a parasitic ear sprite that causes folks to go berserk and the likable loons who try to halt his wacky head trip.
* In "Macabre", a young woman confronts her darkest fears in the specter of a decrepit windmill possessed by The Night Frights.
The horror sampler is prefaced by the titular poem "Chocolate-Covered Eyes". Beware of strangers offering candy . . .

After the Zombie Apocalypse, civilization adapts to troubled times. But can the living and the undead co-exist in peace? A zombie defender must question his principles when a hunter becomes infected by the zombie plague and threatens the boy's mother in "Heartbeat".

A group of young zombie sympathizers are the only thing standing between the diseased and their hunters, who collect a fee for each undead bagged. It's a new world where humans have learned to lead semi-normal lives despite the zombie plague. But when a zombie protector's mother is endangered by a bitten hunter, a boy must question his beliefs and make a choice: protect the zombies or his mom. This is a different zombie tale, one told with humor as well as horror, from the perspective of a young man wrestling to do the right thing in a world gone wrong.

* Meet Jessie Jones, also known as Jester from HEARTBEAT:
Maybe I should introduce myself. My name is Jessie Jones. My nickname is Jester.

All of us in the Corps Of Mutants (COM) have special designations. Code names like secret agents. There's Blowfish: Garth Baxter, a chubby kid who balloons his cheeks when nervous. Stickman: Simon Twiggs, you do the math. Medusa: Maddy Chase, a girl whose hair tends to stand out in clumps like snakes. And Bat Boy: Harlan Thompson, who likes to dangle upside-down. As for me, I'm the runt of the litter. I'm also the brainiest. We looked like an ordinary group of kids — the shy kind who don't fit in; the awkward unaccepted type the cool kids label freaks.

We even have a moral code: No spitting. No swearing. No swiping (unless it's for a positive purpose, like the body parts). No swilling, sniffing, swallowing, or smoking (as in narcotics and other vices). We call it minding our S's, instead of P's and Q's. Of course, this emphasizes the nerd factor and makes us even less popular.

The zombies have been here for as long as anyone can remember. So why, with those lumbering idiots to insult, would bigotry toward the uncouth and uncoordinated still flourish amongst the living? Perhaps there will always be prejudice. Maybe it's locked into our D.N.A.

Ordinary kids don't go around stealing dead people. At least they didn't before. We're doing it, we think, for the common good. Doing what has to be done. From our viewpoint, it seems sort of noble. Others might find it morbid.

EXCERPT:
Fairy tales are as unreal as it gets in my life, but they teach some valuable lessons and that's why they're still around. Big Bad Wolves and Wicked Witches might not be as frightful to kids nowadays, with zombies growling and pawing at them in the real world. Good and evil are less obvious here. Customs that endured for centuries have largely been discarded. I guess fairytales appeal to the child within us all, in an age when children are no longer children. They're survivors.

* Read more samples and other links at Lori's website.