If you're a fan of Henry, the Most Interesting Old Fart in the Apocalypse,  you can read up on how he and Mary escaped the nursing home through a free copy of "Darlings Of Decay", now available Free on Smashwords.com and hopefully soon on Amazon.

***
Hope For A Happy Ending

“Henry, open the door!” yelled Mary, one of the attendants at the Pine Valley Nursing Home.
“Hold on to your britches!” he answered and then lowered his voice. “Ginny, Barbara Jean, I’m sorry but we’re going to have to finish this game later. I think we’ve been ousted.”
Ginny threw her cards down on the table. “Oh, phewy. I think I may have gotten a royal flush this time, too. All I needed were two more cards.”
Barbara Jean snorted. “You’ve been saying that all day. The only thing you’ve gotten is down to your brassiere and panties.”
“Ain’t nothing wrong with that,” cackled Henry, as he pushed himself away from the table. “You’re still in mighty fine shape for a woman in her sixties.”
Ginny waved her hand, blushing. “Henry, you know I’m eighty-four, you sweet talkin’ devil, you.”
“Yeah, but you’ve got the figure of a fifty-year old, and these days, fifty is the new forty,” he said, picking her robe off of the floor. As he stood back up, he winced. “Oh, I only wish I could say the same thing about me. This back of mine is giving me a lot of trouble, lately. I may have to ask one of you to give me a massage once I get rid of Mary.”
“Certainly,” said Ginny, smiling up at Henry, who was still a very handsome man at eighty-nine. He kind of reminded her of Clint Eastwood, always wearing a Stetson and a pair of cowboy boots. Of course, with his tall, lanky body, and full set of teeth, he was definitely the best catch at the nursing home.
Barbara Jean smirked. “I’ve heard about you and those massages, Henry. Nancy James told me all about that ‘happy ending’ you were trying to talk her into the last time your back ‘went out’.”
His watery blue eyes sparkled mischievously. “I don’t rightly recall the ending being happy or what that particularly means, Barbara Jean. Maybe you could explain it later when the two of you return to my room and work out some kinks.”
Barbara Jean rolled her eyes. “Oh, you’re kinky alright-.”
“Henry!” hollered Mary, pounding on the door, much more loudly this time. “Open the damn door. This is serious!”
He sighed.  “Oh, hell. Well, I can’t believe I’m saying this, but Ginny, you’d better put some clothes on before Mary somehow pushes that chest away from the door and starts going ninja on us. When she gets riled up, she’s a handful, by golly.”
Barbara Jean, who hadn’t yet lost a hand of poker or an article of clothing, stood up and reached for her cane. “Well, I guess this party is definitely over. Perfect timing, I suppose,” she said looking at her watch. “I think they’re running some old reruns of Matlock on cable, later.”
“Oh, I’ll bring the popcorn to your room and we’ll watch it together,” grinned Ginny, zipping up her housecoat.
“You’re on.”
“You girls want to help me move that chest out of the way, first?” he asked, walking over to the door. “Before you trade me in for Andy Griffith?”
“Oh, Henry. Andy could never replace you,” said Ginny, eyeing him appraisingly. The man still looked good in Levis. She only wished she would have known him back when he was still in the rodeo, riding those bulls.
“Speak for yourself,” said Barbara Jean. “Back in the day, nothing beat a bottle of Chardonnay, a Matlock marathon, and my B.O.B.” She sighed. “Boy do I miss those days.”
“What’s that, you say?” asked Henry. “B.O.B?”
Ginny giggled. “She means her battery operated boyfriend.”
His eyebrows shot up.


To read more, get your free copy of Darling's Of Decay, now available on Smashwords and Amazon! 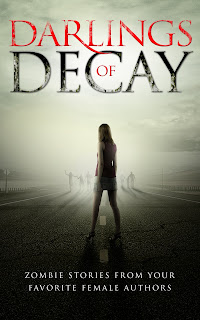