Crime, Death and the Undead in Chicago 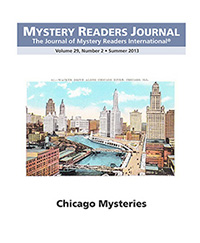 Who says zombies have nothing to do with Chicago? (Have you watched city politics at all lately? ha!)

I may live in Wisconsin now, but you can't take the Chicago out of me. So, it seemed the perfect pairing to write a story involving crime, a little mystery and yes, zombies, as that pertains to GIRL Z: My Life as a Teenage Zombie.  (The book contains scenes in a fictional Lake Geneva and parts of Chicago.)

My story, Crime, Death and the Undead in Chicago is in the just published summer issue (Vol. 29, #2) of Mystery Readers Journal.  See the link for table of contents (my story is on page 51) and samples of a couple other author stories.

Check out the issue (print and pdf) for some other great author stories too!

I really enjoyed writing this story! I've reprinted it here and will add it to my website as well.

Crime, Death and the Undead in Chicago
By Christine Verstraete


Crime and Chicago may be synonymous in real life, but the two can also be strong fictional elements, especially when a story or book character is running from, and fighting ... zombies.

I can hear the gasps and utter horror now—oh, no zombies have hit mysteries and crime novels, too? Yes, but when you think about it, there is no greater crime against humanity than someone fiddling with science and developing a mutant virus that makes the infected undead.

Many novels in the zombie genre, however, do feature crimes and/or mysteries, even if they are not always in the classic Agatha Christie or "who-done it" sense. For instance, besides uncovering corruption in crime-ridden Chicago, Zombie, Illinois by Scott Kenemore features the fitting event of having an undead Al Capone kill (read: eat) the mayor, which, given Chicago politics, is kind of funny and ironic when you think about it.

While set in Pennsylvania, Jonathan Maberry's Dead of Night involves a rogue science experiment gone awry, resulting in a serial killer becoming a zombie and the ensuing unraveling of the crime.

Then there are the multiple crimes of murder—killings by zombies and killings of zombies, though you have to wonder, does it count if they're already dead?--plus the thefts and crimes to property that go along with life in a zombie-ridden world. No one said the zombie apocalypse wouldn't be dangerous--and messy.

In my upcoming novel, GIRL Z: My Life as a Teenage Zombie, (coming in August from Intrigue Publishing) the crime, if you will, is both social and physical. When her cousin comes home and infects her with the zombie virus via an accidental scratch, 16-year-old Becca must cope with a new life as a part Z (zombie), while having to protect her other cousin and her family from hungry, full zombies.

Of course, becoming a part Z comes with its own problems and situations. Not only does Becca have an odd diet (no, not that, though her diet may have you looking at a certain food in a new light. ha!), plus weird quirks and bodily changes that no teenage girl wants to be noticed for, she has to navigate an often violent new world. She and others like her also face danger from bands of roaming vigilantes and members of the general public who still distrust them.

That mistrust finds Becca and friends not only fighting off roaming Zs as they head to Lake Geneva and then to Chicago, but they must escape an angry, gun-wielding homeowner and do a little breaking and entering of their own. Becca has her moments of conscience, but this also is a different world where the old rules don't always apply.

While Becca and her friends' trip to Chicago to track down her and her cousin's missing mothers in GIRL Z: My Life as a Teenage Zombie involves only a few specific locations, those spots, such as the motel near O'Hare Airport and a hospital, not only provide key elements to the story, but offer a little thought-provoking fun. Who says crime—and zombies—can't be funny? (Humor being subjective, of course.)

It wasn't intentional on my part to include any hidden or secondary meanings to the premise of zombies invading a hospital and a motel, but they're there. What began as a comic moment when a group of zombie doctors invade the hospital waiting room where Becca and her friends are ends with its own crime as she is attacked.

That scene below also provides, perhaps, a statement on medicine today, especially in a big city run by politics, and in this case, overrun by zombies:

"I'd taken only one step to go find the doctor when everything went crazy. A group of Zs dressed, of all things, in surgical garb and doctor's whites, shuffled through another door. Talk about bedside manner. . ."

Growing up as I did with Chicago politics and covering some government events later as a reporter, plus my being a TV news and daily Chicago newspaper junkie, must've nurtured a subconscious desire to write a book featuring assorted crimes, a little mystery, and yes, zombies.

I've always been a horror or "monster" fan, so that made sense. On the other hand, I'd already seen enough of the monotone answers and half-dead reactions of many in government and politics to make zombies seem, well, almost natural.

You see? Crime, mysteries and zombies really do mix after all.
(C) 2013 C. Verstraete