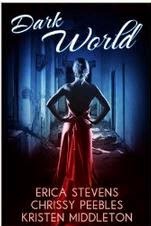 GirlZombie co-blogger Kristen Middleton and author Chrissy Peebles may be the queens of finding new ways to share their work. While Kristen's book Zombie Origins (book 1 in the Zombie Games series) is perenially free, by repackaging the book again, it gives different readers a chance to also sample new stories they might not have seen.

Note: This compilation includes first parts of series. *Strong language, some violence and sexual content  - for readers 17 and up. (NOTE: This compilation was free at time of writing. Check price before downloading.)

I’m a survivor, living in a post-apocalyptic world. I live deep in the ocean and that's how we all survived the world's greatest catastrophe known to man. I’d often dreamt of a normal life, but sadly, that wasn’t what fate had in store for me. See book trailer.

The world didn’t end with a bang, it didn’t go out in a ball of fire and fury, nor did it end in ice. But in some strange way, ice was the end; or maybe it was the beginning of something more.

Bethany struggles to come to terms with her past, her terrifying new reality, and her growing love for a boy that is powerful, mysterious, and perhaps even more frightening than the aliens hunting them. Aliens that want more than their lives, they also want their blood.

Book 1 The Ravening Series  - Young Adult. This book contains some language, violence, and sexual situations. Recommended for ages 15 and up.

When an untested vaccine kills more than just a rampant flu virus, 17-year-old Cassie learns how to survive in a world where the dead walk and the living... run!

This YA story is a lighthearted adventure filled with zombies, butt-kicking teenaged girls, a man obsessed with video games, an annoying but totally HOT karate instructor, and humor when needed.

*This is a young adult fictional story that includes some language, violence, and adult situations. Recommended for mature teens or older.

THE ZOMBIE CHRONICLES by Chrissy Peebles

Val was bitten by a zombie and now she’s scheduled for lethal injection. Breaking all the rules, 18-year-old, Dean Walters snags an experimental serum. But it can’t be tested until Val turns into a zombie: something authorities won’t allow. Her execution is scheduled to happen before transformation is complete, giving Dean only hours to break her out.  (For mature teens and older - mild violence.) See book trailer.

THE SURVIVOR CHRONICLES by Erica Stevens

The First tremors of the earth were felt at 7:22 EST. time. Every single person felt the rumbling, and experienced the tremors that would forever alter the course of history. Most did not survive. These are the accounts of some of those that did.  (First compilation of an ongoing serial story. This is not a survivalist story; other books in the series have zombie-like characters. Warning - language and graphic content. For readers 17 and older.)

Posted by CA Verstraete at 6:17 AM