. (Available in paperback and Kindle).  Read on for her comments and an excerpt. 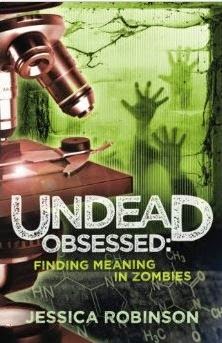 
Using film, literature, and interviews with experts, Robinson examines how zombies portray real-world fears such as epidemics, mind control, what may or may not exist in space, the repercussions of playing God, and the science behind the fears. Robinson's goal is to explore how zombies become a metaphor for our fears of science and what could happen if science gets out of hand.


Chapter 15: Surviving the Zompocalypse: Learn to Work Together


Talking with the Author:


What inspired the book?
I’ve always wanted to write about zombies, but I didn’t know what I wanted to write about.  After watching World War Z, it inspired me to look at the scientific side of zombies.  After all, most zombie films have a scientist or science in them in some form—and that form isn’t usually very flattering.

What was the most surprising thing you learned?
The most surprising thing I learned while writing this book was how helpful and willing people were to be interviewed.  They may not have wanted their name to be used in the book (or they may not have been zombie fans), but they were more than happy to answer my questions.  I couldn’t have done it without them, and I am so grateful for their help.

What do you hope others take away from the book?


I learned so much while I was researching, and I really enjoyed doing it, so I hope that others discover something new and look at zombies and science in a slightly different light.

Zombie films serve as a great lens to examine concerns society has about modern science. Let’s face it, when it comes to horror movies, science has a bad reputation. Blind ambition, experimental serums, and genetic experiments are often blamed for the giant monster terrorizing the city or the reason aliens are taking human prisoners or the cause of the dead rising from the grave to consume living flesh.

Using film, literature, and interviews with experts, this book examines how zombies portray real-world fears such as epidemics, mind control, what may or may not exist in space, the repercussions of playing God, and the science behind the fears.

Science has made it possible for us to live the way we do; it has given us numerous advances in all fields of life from medicine to agriculture to entertainment. Yet, with all of these advantages, there are a multitude of disadvantages that could prove to be detrimental to humans and society. Weapon technology used in wars is one of these major disadvantages, but anything that is beneficial to humanity, including medicine, has the potential to harm us. My goal is to explore how zombies become a metaphor for our fears of science and what could happen if science gets out of hand.

Throughout this book, I examine the fictional world of zombies and the real world of science. Often, I refer to “truths” about zombies, but since they don’t really exist, these are “truths” that exist within the context of zombie films and books.

I was in junior high the first time I ever saw Night of the Living Dead (1968). It was one of several movies my dad had on VHS, and it sat on the shelf in a closet with row upon row of other VHS tapes. I remember being scared, but not cover-my-eyes-I’m-going-to-scream-my-lungs-out scared. I didn’t jump, but there was this uneasiness that settled over me. I was afraid to look out my bedroom window at night for fear that the same lifeless eyes the creatures in the film had would be looking right back at me. I glanced over my shoulder while walking down the street to make sure a slow-moving corpse wasn’t following me. For a while, I avoided cemeteries.

The next night, I had a friend come over to stay the night and I exposed her to the film. Again, it didn’t scare us in the make-you-jump-out-of-your-skin way, but as she sat on the floor tightly hugging a pillow, I knew she had experienced the same creepiness I had the night before. It was a feeling neither of us could put into words. Despite the unease, I enjoyed the feeling and wanted to explore it further.