. (Amazon UK) (Be sure to check out the giveaway!) 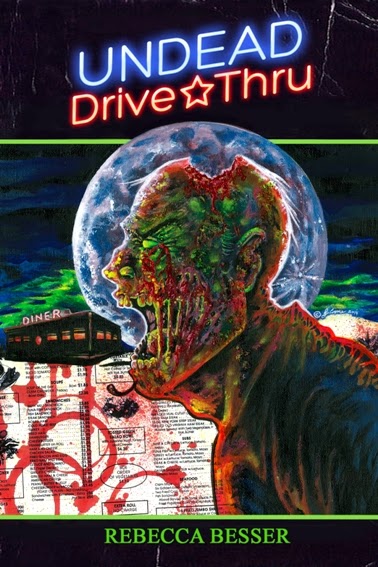 When Kyndra, Colleen, and Jose apply for jobs at a diner that has seen better days and is undergoing renovations, they have no idea what they're in for.
Aunt-B and John have a horrible secret, and when it's unleashed on the unsuspecting employees of the diner, things get . . . complicated.
Bloodthirsty and dangerous, a zombie awaits the opportunity to feast on them all.
Who will be served first? Can any of them make it out of the Undead Drive-Thru alive?

(I'm also sharing some info today on my book GIRL Z: My Life as a Teenage Zombie at Rebecca's blog!)

Rebecca, welcome! Tell us a little about yourself...

Bec: I’m a wife and mother, a graduate of the Institute of Children’s Literature, and a writer who has been publish around 300 times in a variety of mediums in fiction, nonfiction, and poetry for various age groups. I’m best known for my works of adult horror.

What's your most recent release(s)?

Bec: My most recent release is a re-release of my zombie novella, Undead Drive-Thru. The sequel, Undead Regeneration, will be released this coming summer.

How do you plan to spend Christmas this year?

If someone were to give you a book (or ten) as a present, what titles would you like to receive?

Bec: Hater & Dog Blood by David Moody, anything I don’t presently have by Joe McKinney, and the book I don’t have in the Shadow Dancer series by Courtney Rene (plus the next installation of her Howl series that hasn’t been released yet).

How many books do you currently have out?

Bec: Four by just me, although, if you visit my Amazon author page, I’m associated with 57 titles.

What inspired your book?

Bec: The original artwork from the first release. I was inspired by the image Justin T. Coons had created.

Do you have a favorite scene and why?

What led you to write about zombies?

Bec: Zombies are fun. I’d previously written a few short stories about zombies, so a longer work was logically the next step. Besides, Undead Drive-Thru is not the normal zombie book/story.

What else do you do when you're not writing?

Bec: I’m an editor, maintain websites, watch movies, spend time with my family, cook, shoot, hunt, play with our puppy, do cross-stitch, crochet, and many, many other things. I’m a busy woman all the time.

Look for official rules and how to enter on her blog:
http://rebeccabesser.wordpress.com/2014/11/13/udt-rerelease-giveaway/

“He knew he was getting close to the end of the path when he almost stubbed his toe on a large rock barely visible in the underbrush. Skirting it, he continued toward the rundown, two-story house, looking for anything out of the ordinary; he’d learned over the last couple of weeks that being aware was of the utmost importance. He slowed for a moment as he stepped out of the tan, dry overgrowth and into the slightly shorter, weed-choked yard. Not seeing any movement, he continued to the front door. Throwing it open, he braced himself for an attack. When one wasn’t forthcoming, he stepped through and shut the door behind him, listening intently for any sound that might indicate what was going on and where it might be happening.

It took a few moments, but he finally heard moans and his aunt’s distressed voice floating in through an open window – they were outside. Growling and muttering curses under his breath, he went back outside and circled around to the rear of the house, fighting his way along another overgrown pathway.

Just as he was about to turn the corner of the house, he tripped over a partially buried brick in the ground, bordering a long dead flower bed that used to run along the side of the building. He fell hard, scraping his hands on dirt and small stones and smacking his head off another of the bricks.

“Shit,” he muttered, lying on the ground, dazed. Closing his eyes and taking a couple of deep breaths, he pushed himself up onto his knees as something warm and sticky ran down the side of his face. Reaching up with one of his sore hands, he touched the liquid and opened his eyes a crack to see that his fingers were covered with blood. In less than an instant after he realized he was bleeding, he heard an intense hiss to his left. Looking up, trying to focus, he saw his uncle, Sam, charging at him with hunger in his milky eyes.

Just before the shambling, undead corpse of his uncle could get his claws into him, John rolled out of the way and to his feet in one fluid motion. He wavered and almost fell again as his head wound made the world spin, but snapped erect when Sam darted at him again. Sam was so close that John could smell his rotting stench and it made his stomach reel.

John turned to run, but only made it a few paces away before Sam tripped over the same bricks that had been John’s downfall.

Sam fell, sprawling, into a huge, dead bush and flailed, moaning, trying to get free. Aunt-B took the opportunity and pounced, throwing the blanket over her undead husband. John turned back and helped restrain Sam, wrapping his arms around the blanket-covered body in a bear hug, locking his hand around his opposite wrist.

“How did he get out?” John snapped, wrestling Sam toward the front of the house.

“I don’t know! I was too busy trying to keep him from wandering off to figure it out!”

The bundled-up Sam in John’s arms fought vigorously and tried to break free, using all his undead and blood thirsty strength. It took everything John had to keep him under control, but even with his head pounding and his body sore from falling, he held on tight while Sam moaned incessantly.

Sam bit at the blanket and tried to get to the fresh blood that was so close.

Aunt-B rushed ahead of them, being careful not to fall herself, knowing more blood would only make Sam more difficult to handle. She reached the front door and held it open as John struggled around the corner of the house, gasping as Sam almost threw both of them off their feet again when he started shaking violently.

John swore and held on, leaning backwards slightly. Using his superior height to his advantage, he partially lifted Sam’s feet off the ground. Soon, the flailing stopped and Sam’s feet wiggled around in the air, trying to find footing once more, but he still bit at the blanket and tried to claw his way out. Groaning, John put him down and forcefully pushed on to the waiting door.

“I’m sorry,” Aunt-B whispered as they wrestled into the house.

John wasn’t sure if she was talking to him or Sam. He knew how she still had a soft spot in her heart and/or head for her husband, and it bothered him. A normal, sane person would have killed – or had someone else kill – their spouse who’d turned into a zombie. But no, not Aunt-B, she was too softhearted to ever do anything like that and left every day to chance. She chanced Sam getting free and hurting others, or even starting an outbreak. She also risked their lives by insisting they live in the same house as such a dangerous creature.
John and Sam stumbled through the house, knocking over furniture, and almost fell a couple of times.

“Open the cage!” he yelled, holding Sam slightly away from the door that opened into a small bedroom wherein a steel cage had been built.

“I’m coming! I’m coming!” Aunt-B huffed as she wiggled between them and the wall, clamoring over a chair they’d knocked down during the struggle; she stepped inside the bedroom.

Flipping the switch on the wall, the room lit up with light from a single florescent bulb in a ceiling fixture and she made sure the cage door was open; it was a large enclosure that almost completely filled the small room, pressing up against three of the walls.

“It’s ready,” she said, stepping back out of the way, letting John in front of her.

“Stand back,” John huffed breathlessly. “I’m going to pull the blanket off and shove him in as fast as I can.”

“Okay,” Aunt-B said from a few feet away.

John glanced at her to see where she was and his jaw tightened when he saw the tears running down her face and the way she was wringing her hands.

Using the pissed off energy and the pain coursing through his body to fuel him, he quickly pulled off the blanket and planted his foot on Sam’s butt. He kicked his uncle forward hard enough to propel the zombie into the holding cell, sending him sprawling as he fell on his face.

John slammed the steel door sharply and was about to turn away when he noticed it hadn’t latched.