Today's Christmas Read is the thriller, Chain of Evidence 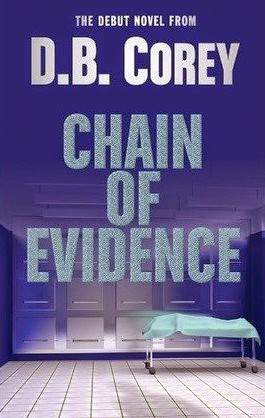 
They say the evidence never lies, but an aging Detective Moby Truax thinks it must when he takes on the toughest case of his career.  A killer of women roams the streets of Baltimore, and the evidence remains consistent but the victims do not. Truax suspects a copycat, but his young captain turns a deaf ear and endeavors to replace him. As victims become younger, prettier, FBI Special Agent Frances Vecchio is assigned to the case and launches her own investigation into the Cyanide Killer. With Vecchio interfering with his every move, Truax struggles to overcome the only flaw in his theory—the evidence itself.

Jade began to fidget and cry, Annie looked up, and Audrey began bouncing Jade on her knee. It did little to appease the child.
“I think she’s getting hungry. Can we go next door? I want to make her some lunch.”
“Sure. We’ll go with you.” Truax got down on one knee. “Thank you, Annie. Only a big girl could be so much help.”
Without another word, Annie slid off the sofa and ran back into her room as fast as her little feet would carry her. After Audrey made sure that her apartment door would not lock, she started across the hall to Kara’s apartment with Jade on her hip. Truax and Vecchio trailed her by a couple of steps. As they went, Truax’s mind was working.
Bottle…. Bottle…. She must have meant the poisoned water bottle Johnson found in the sink.
When they stepped into the kitchen, Audrey placed Jade in her highchair. Fetching a clean bottle from the dishwasher, she filled it with formula and sat it in the pot still sitting on the stove. She turned the burner on low.
“Why not use the microwave?” Truax asked the question, but was pretty sure of the answer he’d get.
“Oh ... Kara never trusted it for the baby. Always heated her bottle on the stove.” Jade continued to cry and held her arms out toward the counter.
“What sweetie?” Audrey asked.
She turned and saw that Jade was reaching for her water bottle. “Oh, you want some wa-wa?” She placed the bottle on the tray.
Jade picked it up and, once she found her mouth, began to drink. Audrey continued.
“I’m sorry Annie couldn’t be of help, Detective, but she’s just little, and….”
Audrey saw that Truax had stopped listening.
“Detective?”
Vecchio‘s head snapped around when Truax didn’t answer.
“Moby?”
Truax ignored both women. His eyes were fixed on the sink and the flashing red LED on the water filter. He glanced over to Jade happily drinking from her bottle, and saw the water level decrease with each swallow. His eyes shot back to the faucet and the flashing red warning light, then again back to Jade’s bottle.
Something ate at him, gnawing away at his insides like a parasite. If Kara didn’t trust a microwave to heat her baby’s milk, would she give her water from a dirty filter? Especially when she had a bottle of commercially filtered water?
Truax exploded across the room startling both women. In a blur he lunged at the highchair, and Jade.
“NO!”
Audrey stood in stunned disbelief as Truax slapped the half-sized bottle from Jade’s hands and sent it flying across the kitchen. Vecchio froze not knowing what to do. Truax snatched up the startled child knocking over the highchair and sprinted to the front door, leaving the two women mouths agape in the kitchen.
Running outside he saw the ambulance with Kara’s body turning the corner two blocks away. Then he spotted Johnson getting into his car.
“Johnson! … JOHNSON!”
“Yeah, Moby.… What?”
“Do you have a poison kit?”
“A poison kit? No, I don’t usually carry—”
“Get the paramedics back here, NOW!” He turned and nearly knocked Audrey down after she overcame her hesitation and followed him out. He grabbed her arm hard enough to leave bruises. “Did she use vitamins?” Truax screamed. “B-12! DID SHE HAVE ANY B-12?”
“B-12? I have some, but why—”
“GET it! Right NOW!”
Suddenly panicked by the intensity of his outburst, Audrey rushed back into her apartment with Truax on her heels. Vecchio, hearing the exchange was already in the bathroom ripping open the medicine cabinet and rifling through the medication. She found the bottle of vitamin B-12 capsules.
“Dump them in the sink,” he commanded Vecchio, shoving the baby into Audrey’s arms. “Hold her! Open her mouth!”
Grabbing several capsules from the sink, Truax broke them open. Seeing Audrey struggling to get Jade’s mouth open, he forced the baby’s jaws apart with the thumb and forefinger of one hand and poured the powder into her mouth with the other. Jade cried and squirmed and tried to spit it out.
“HOLD her! God-DAMN IT!” He dumped water into her mouth and clamped her jaw shut, closing off her nose at the same time and forcing her to swallow.
Audrey stood horrified holding a writhing Jade in her arms. She turned the child away in an attempt to protect her from a madman. “What in the HELL are you DOING to this BABY?” she screamed.
Truax’s light gray eyes bored into her like a drill. His face hardened, but his voice did the opposite, commanding her attention. “This child will be dead in minutes,” he said softly, “if you don’t hold her still.”
Audrey’s mouth dropped open as if the muscles holding it closed had suddenly vanished. She did as ordered and Truax gave Jade another dose. The paramedics arrived moments later.
“Treat her for cyanide poisoning,” he ordered, “and HURRY!”
The medics hustled Jade to the living room and held an inhaler of amyl nitrite under her nose. They followed up with dosed, intravenous injections of sodium nitrate and sodium thiosulfate.
Afterwards, they hurried her to the ambulance and rushed her to the hospital. As they pulled away, Truax watched from the doorway and ran his fingers across his bald head, a nervous habit that replaced his old one of reaching for his cigarettes without thought. Until lately.
When they walked back to the kitchen, Truax picked up the water bottle, unscrewed the top and gave it a sniff. There was the faint aroma of almond. He screwed the lid back on and tossed it in a zip-lock baggie he found in a drawer, then began patting himself down for the pack of cigarettes he knew he didn’t have.
“Jesus, Moby,” Vecchio said, shaken to the core. “How the hell did you know?”
Truax turned and leveled a pair of tired eyes at hers.
“I’m a cop, Frankie. I’m supposed to know.” 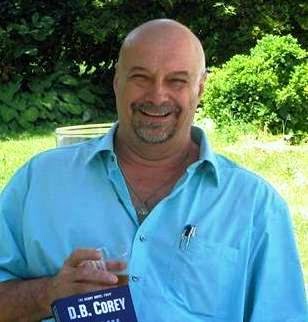 DB Corey lives in the suburbs of Baltimore with his lovely wife Maggie, and their two annoying dogs: an oafish Chocolate Lab named Murphy, and Bond (James Bond), a Catahoula-Leopard/Australian-Shepherd mix. Between them (the people, not the dogs), they have five grown children who have become: A carpenter, a federal legal aid/nutritionist, a Baltimore City cop, and two college students.

Since writing a novel does not guarantee wealth, or even a decent living, Mr. Corey and his wife remain at their day jobs to keep the roof over their heads and food on the table, most of which their five grown children (who no longer qualify as legal tax deductions) happily relieve them of whenever the opportunity avails itself ... usually on weekends.