Today I welcome John Linwood Grant who lives in Yorkshire with a pack of lurchers and a beard. He may also have a family. He focuses particularly on dark Victorian and Edwardian fiction. He has been published in a wide range of anthologies and magazines, with stories from madness in early Virginia to questions about the monsters we ourselves might be.

He is also co-editor of Occult Detective Quarterly.
His website, http://greydogtales.com/blog/, is an eccentric compendium of weird fiction, weird art and even weirder lurchers. 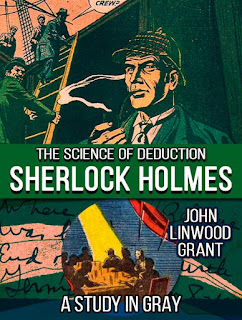 He is the author of A Study in Grey, a novella of period psychic adventure and investigation, with the surprising addition of a retired Sherlock Holmes. Part of the Tales of the Last Edwardian series, it features Captain Redvers Blake, a military investigator, and the powerful psychic Abigail Jessop.

Who am I? It doesn't really m-m-matter. I do what is required, and if I didn't, no d-d-doubt someone else would. The more you ask, the more chance there is that you'll find a man in the shadows outside your house tomorrow night. He won't do anything to you. He'll watch, and he'll listen. And then a scuffed manila file will be p-p-pushed across a desk, somewhere in Special Branch.  The thicker the file, the sooner you might see me again. And I understand my duty. In Whitehall they call me the Hangman's Friend, because I see that's he's kept in gin – and work. For the meantime, you can call me B-b-blake, Captain Redvers Blake, of no regiment you'd ever want to meet.

And how did I get involved in what I d-d-do? I went to South Africa. I fought the B-b-boer, the black man and the British, according to what was needed. The last part wasn't supposed to happen, but I saw too many shadows under an African sun, and someone had to act. Now I sit in a cramped office in London, waiting for the shadows to arise. The psychic, the strange and the spiritual, the things that no-one else wants to handle. From an unexplained theft at His Majesty's dockyards to an admiral who sees the d-d-dead walk his ship's bridge, I'm the man. Whether I want to be or not.

A Study in Grey was an accident. Whilst writing Edwardian supernatural stories, the question came up as to whether Sherlock Holmes could legitimately be included in a psychic or supernatural story, given his scepticism. I decided the answer was yes, if the tale was handled a little differently. Captain Redvers Blake knows the great detective's limitations, and so he works round them. He leaves Holmes to follow logic and the history of an old case, while he himself gets on with the dirty work.

How does your character get into their particular situation?

The dilemma in my book is simple. A member of parliament, one who is involved in military affairs, has been attending a spiritualist circle. He appears to be taking advice from his son – but his son died in action three years earlier. In the process, he may be passing on information to foreign powers, for the apparent head of the circle is a monster from Holmes' past. And so Blake, who has a certain unwelcome psychic gift of his own, is sent to ferret out the truth, one way or another.

Could these events actually happen?

As to whether the events outlined could have happened, then the fact is that most of them could. The bulk of my background writing is historically based, and the story occurs at a time when the Armed Forces were being reformed, there was increasing Special Branch concern about anarchists, Bolsheviks, Fenians and foreign agents. There was tension with Germany, the Austro-Hungarian Empire and many others.  And maybe there was such a man as Redvers Blake. If there was, they would hardly have left records lying around, would they?

An Excerpt from A Study in Grey:

The pre-amble to the séance was mercifully without hymns. As soon as all were seated, Miss Huxtable took charge. She explained that she would seek to channel the souls of the departed, those who still held fondness for their earthly friends and relatives. It was a preamble aimed mostly at Blake and Abigail. The others here seemed to be regulars at the Selby Hall sittings.
There was no holding hands, only palms placed lightly on the table and all but two candles extinguished. Blake's night vision was good, but he disliked the idea that anyone could be in the gloom, examining ten sets of shoulders with a view to blunting a knife between them.
Muttering from Miss Huxtable, the slow sink of her chin onto her chest. There was to be no spirit guide either. The talented Enid was quite capable of pushing the veil aside herself, apparently. Blake watched Abigail, who sat straight-backed with her eyes closed.
“This is a safe place,” said Miss Huxtable in a low voice. “We are friends here, seeking only truths which are beyond us whilst we tread the earth. Let others who have passed approach, without fear or malice.”
She looked up, bright-eyed in the candle-light.
“Who wishes to ask?”
Guests glanced at each other, hesitating. An older woman enquired about her late husband, but after some minutes, Miss Huxtable pronounced that he must have moved on beyond earthly matters. Dull stuff so far, thought Blake.
Then Edgar Stafford coughed.
“If I might… my son, Alexander. Is he with us tonight?”
Miss Huxtable lowered her head again, and shuddered.
“He is here. He has waited for you.”
“Can I speak to him? Alex?”
The entreaty in Stafford's words was painful to hear. There was little doubt that his feelings towards his late son were genuine.
Blake had expected mimicry, or an obvious affectation of tone, but the reply came in the medium's normal voice, perhaps slightly more husky.
“Pa, I'm here.”
“Alex!” Stafford leaned forward. “Oh son, are you well?”
“Always, pa. In this place, we are all—” Miss Huxtable shuddered again, and Blake leaned forward. The woman was looking suddenly confused. “But, pa, who is with you?”
“What do you mean, Alex?” asked Stafford, frowning.
“In the circle, someone different…”
Heads turned to Blake or to Abigail. Some started to mutter to their neighbours, but were quelled by a wave of the countess's hand. Blake had gauged the distance to the main doors and considered a number of responses, but Abigail spoke up before he could move or say anything.
“I am here.”
“You… you are different.” The voice from Enid Huxtable was older, wilder, no longer the medium's own.
The merchant's wife gave a small cry. “Oh, Miss Clay has the gift!”
Abigail ignored her.
“I am Abigail. What should I call you?” she asked.
“I… I am Alexander.” The medium's shoulders heaved, a look of puzzlement on her face. Blake would have bet a half-crown that she was as surprised as the other sitters.
“You are not.” Abigail's voice was clear and precise.
“But...”
“Name yourself.” She lifted one hand from the table and sketched a sign or word in the air with her forefinger. “I will know you, formless or forgotten. Name yourself!”
“I cannot. I cannot remember…”
And now there was growing alarm around the table. The medium was twitching,  fingernails digging into the polished wood.
“Name yourself!” The third time, and Blake saw the insistence in the young woman's voice as if it were a clear blue light around her, an aura of pure determination…
“I do not... know... my name!” Miss Huxtable shrieked, throwing back her head.