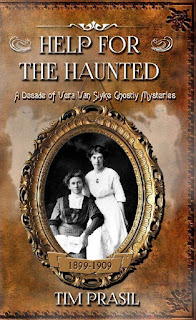 Today I have the privilege of welcoming Tim Prasil, author of Help for the Haunted: A Decade of Vera Van Slyke Ghostly Mysteries(1899-1909). He also writes audio drama, and his anthology Marvellous Boxes was produced and posted to the Web by The Decoder Ring Theatre. Two of those productions were selected for broadcast by the Australian Broadcasting Corporation. His Chronological Bibliography of Early Occult Detectives has revised the standard history of occult-detective fiction, tracing the cross-genre back to 1815. This led to his editing Giving Up the Ghosts: Short-Lived Occult Detective Series by Six Renowned Authors, published by Coachwhip Publications. The chronological bibliography along with other features and news can be found at https://merryghosthunter.wordpress.com/ .

Lovely to meet you. I’m Vera Van Slyke, and thank you for asking me here to discuss my ghost hunting. I’m a newspaper reporter, and debunking psychic mediums is my special crusade. Some people are surprised by this—I mean my being a ghost hunter on the one hand and a skeptic when it comes to séances and Spiritualism on the other. When asked how I reconcile my skepticism with believing wholeheartedly that ghosts do invade our physical realm, I explain that ghosts are like cats. They’re real—but they hardly come when called.

A funny thing is that my journalist’s crusade is how I met my dear assistant. She’s a woman of many names, so you’ll forgive me for having to consult my notes. You see, I’m not very strong with names. Yes, here we are. Ludmila Prášilová immigrated to the U.S. in 1887 when she was a mere child, and her pet name was Lida. She began to introduce herself as Lucille Parsell, though, about the time she became a young Spiritualist medium. Her mother was involved in that, and it’s a delicate subject. I best jump ahead.

It was in 1899 that I met her. I was attending a séance at the Morley mansion, the house in Boston belonging to the man who inherited all that tobacco money. Well, as it turns out, the medium conducting the séance was Lida! (I’ve come to call her Lida. It’s easier for me.) Of course, we didn’t know each other, and I went ahead and debunked her. Between you and me, I somehow sensed that she was ready to be debunked! 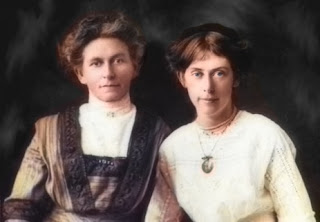 At the time, I was working on a book about the ruses of Spiritualist mediums, and I asked Lida if she would allow me to interview her. Within a year, the dear woman—almost still a girl at that time—was serving as my personal assistant. We grew to be very dear friends, too. Much later, I learned that all along she had been chronicling many of the ghostly mysteries we investigated together. Yes, and sharing them with the man she would marry. That leads to a sad story. For another time, perhaps.

Now, remind of the name of that famous detective fellow. Oh, you know! Fictional, but English. Smokes a pipe and seems a bit smarter than anyone could actually be. Has a doctor for an assistant. Well, no matter. Lida often compares herself to that doctor and, I guess, myself to the detective. I’ve never understood the connection. After all, I’m American, not English. A woman, not a man. I pursue ghosts, not criminals!

How did you get involved in your current situation?

How did I become a ghost hunter? Well, as a child, I had a fascination for ghost stories — and then for ghosts alleged to be authentic. When still fairly young, I introduced myself to a man named Harry Escott, a very great ghost hunter and a kind, wonderful man. He was my mentor. Our investigations into haunted places and supernatural phenomena convinced me that phantoms really do lurk among us.

Years later, after I met Lida, I ran an advertisement in newspapers across the U.S., offering help for the haunted. The responses to that advertisement introduced me to some truly baffling—and occasionally quite frightening—cases in a variety of otherwise perfectly charming locales.

In fact, I’d best go catch my train. I’ve received a report of coats—ordinary coats, you understand, that seem to be dancing in the air. Utterly by themselves! I don’t recall running across anything like it before. But do promise me we’ll get to get together again soon. Tell me, do you happen to enjoy beer?

The Author’s Turn: What inspired the book?

I’d been researching the history of the occult detective figure in fiction. For a long time, these have been said to begin with J. Sheridan LeFanu’s Dr. Hesselius—who’s a pretty sorry start, if he were the first. He fails in his only real case, “Green Tea” (1869), and then only acts as a framing device for a few other stories. I found that the roots of fictional occult detectives actually go much deeper, at least as far back as 1817! This is before Edgar Allan Poe supposedly “invented” detective fiction around 1841, another claim that’s easy to disprove.

Among all of the occult detective characters I dug up, I couldn’t help but notice a glaring lack of women—not even in the years when women were advancing professionally (think of journalists like Nelly Bly and Ida Tarbell) and when women were fighting for and winning the right to vote.

So I invented a female ghost hunter/occult detective from that time period.

Explain the main dilemma/situation in your book. Could it happen?

Help for the Haunted is a composite novel or a short story cycle, meaning that it’s made up of individual investigations—thirteen of them—while including an overall arc. Each case involves solving the mystery behind a haunting and, hopefully, putting an end to it. (Vera’s often—but not always—successful.) Across the span of the entire book, 1899 to 1909, Vera develops a strong friendship with Lida, discovers an affection for a newspaper editor in Pittsburg, contends with a world where women face any number of societal hurdles, and deals with a deeply held secret regarding her past.

Most of the Vera and Lida story, from the professional to the personal, could very certainly happen. The ghostly activity? Hmm, probably not that. And probably not the distinctive method the duo uses to confirm whether or not there are ruptures between the physical world and the Great Beyond, openings that allow for ghosts to cross over. It involves two oboes, one playing a B-flat and the other a high G. It’s complicated and probably not at all realistic. Why not? Hmm. Why not indeed?

An Excerpt from Help for the Haunted:
“According to this gentleman,” I told Vera Van Slyke, “you’re a gentleman.” I handed her a letter addressed to Mr. Vernon Van Slyke.
Glancing over the correspondence, she replied, “One might expect greater precision from a coroner.” She looked up and winked at me.
“Oh, that’s far from the strangest part of the letter,” I warned.
Vera’s smirk was replaced by a blank expression. She placed two fingers to her jaw as she leaned back to read.
Peter M. Hoffman, coroner of Cook County, explained that his office had been tasked with explaining three deaths of a highly peculiar nature. A possible fourth victim was still being investigated. In each confirmed case, termination of life was preceded by — as Mr. Hoffman termed it — “manic vitality,” which he defined as “an exuberant and indefatigable expenditure of energy on such activities as dance, sport, drink, and less sanctioned forms of pleasure seeking.”
Vera looked up from the letter. “Does he mean these three people enjoyed themselves to death?”
“He says that each man died with a smile on his face,” I responded.
After another blank stare, Vera returned to Mr. Hoffman’s letter.
The coroner surmised that the condition was somehow related to the employment of the victims. All three of the confirmed dead men — Cyril Hughes, Donny Reynolds, and Carl Hanacek — worked side-by-side for the Illinois Tunnel Company. The man still being sought was their co-worker. This firm had been organized to dig passageways deep below downtown Chicago, the tunnels designed for transporting freight, coal, and mail, thereby easing congested street-level traffic. The four men had performed the initial digging and finishing work before another shift lined the tunnel with concrete. Sometimes, their work had taken them as far as forty feet below the surface.
“Forty feet underground,” Vera muttered. “Must the sun of ingenuity forever be eclipsed by the moon of lunacy?” She began to sneer at the letter.
Fearing that the deaths might have resulted from some unknown gas or other substance better left buried, Mr. Hoffman presented his findings to the city council charged with overseeing the tunnel project. The coroner argued that informing the public of the early symptoms might prevent future tragedies and that the digging should stop until more information was gathered. The councilmen, however, unanimously insisted that the public not be alerted to the danger. Mass panic was likely to result, they insisted. The digging, they amended, would continue. Mr. Hoffman suspected that the council was more concerned with its own reputation than with the public good.
“This Hoffman seems like a well-intentioned fellow,” Vera murmured as she turned the page over.
Seeking the assistance of a courageous journalist, Mr. Hoffman had been told that “Vernon Van Slyke” was known among local reporters for being both daring and otherwise well-qualified in dealing with strange phenomena. The three deaths certainly counted as strange. The coroner ended his letter with an urgent request to meet, suggesting a time and location that would allow an examination of the tunnel where Hughes, Reynolds, and Hanacek had worked together before losing their lives. In a post-script, he clarified that the tunnel had been lined with concrete and no workers since had shown any symptoms of the deadly “manic vitality.”
Vera carefully placed the letter down on her desk. “Jot a note in reply,” she instructed me. “Say that I’ll gladly meet with him as he suggests. If at all possible, don’t indicate that I’m a woman. I’d love to see his face when I arrive in my most frilly and feathery hat.”
With a snicker, I said, “I’ll do my best, sir.”