'Tis the Season to Get Spooky!

Some unique, scary, spooky and strange books I've come across that you might want to add to your reading list. Be sure to read them with the lights--off! heh-heh.

A storm is raging in Hemlock Cove, but it’s nothing compared to the one raging in Aunt Tillie’s head. An accident renders Aunt Tillie unconscious in the hospital, and when Bay and Landon fall asleep while sitting vigil, they’re transported to a scary world: Aunt Tillie’s mind. The couple will be shuttled through time – almost eighty years of it – and witness all of the ups and downs of Aunt Tillie’s past.

An Egyptian mummy rises from the depths to wreak havoc upon the sleepy Wisconsin town of Phantom Lake. Now, only the bravest Canoe Cops, led by Lieutenant Richard Agar, and auxiliary Paddle Girl (and expert diver) Julie Browning stand between their city and the mummy’s deadly curse!

Here's a unique one combining the FBI and witches!  Conjuring Quantico by  T.S. Paul

How do you cope with magic that goes its own way?
As a second year FBI academy witch, Agatha Blackmore has a curtain reputation. After nearly blowing up the school, an untended mid-air incident involving the FBI Director, and declaring war with the US Marines, she has to wonder if she will even see graduation.
But when a rash of mysterious disappearances catches the attention of local authorities Agatha finds herself asked to lend a hand to the investigation. Determined to offer protection where it is needed the most, Agatha and her quirky roommate Cat along with her mini- unicorn familiar Fergus, attempt to unravel the mysteries of the four distinctly magical disappearances before time runs out.

In her twenty-fifth adventure, vampire hunter and necromancer Anita Blake learns that evil is in the eye of the beholder...
Anita has never seen Damian, her vampire servant, in such a state. The rising sun doesn’t usher in the peaceful death that he desperately needs. Instead, he’s being bombarded with violent nightmares and blood sweats.


And now, with Damian at his most vulnerable, Anita needs him the most. The vampire who created him, who subjected him to centuries of torture, might be losing control, allowing rogue vampires to run wild and break one of their kind’s few strict taboos.

Lizzie Borden, Zombie Hunter by C.,A. Verstraete - What if Lizzie did

kill her father and stepmother... because she had no other choice?
(New 2nd edition & New cover!)
Every family has its secrets…

One hot August morning in 1892, Lizzie Borden picked up an axe and murdered her father and stepmother. Newspapers claim she did it for the oldest of reasons: family conflicts, jealousy and greed. But what if her parents were already dead? What if Lizzie slaughtered them because they’d become... zombies?

** Cool! The book is also included in the New Releases Horror List on Goodreads! All kinds of great horror! 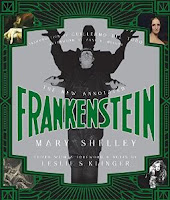 New Annotated Frankenstein - For the true collector, author Leslie S. Klinger offers insights and comparisons on the 1818 and 1831 texts, plus over 200 illustrations and a foreword by director Guillermo del Toro. (Kindle and hardcover, pre-order. Coming  July 25, 2017.)

Risk, A Samantha Reese Mystery Book 2, Jaime Johnesee - Neck-deep in the hunt for members of  Americans for a Were-Free America, Sam discovers she's not the only one on the prowl.


The horrific crime scenes the FBI stumble across tell Sam that whatever is pursuing her enemy is more vicious and cold than even this most extreme of hate groups. Forced to protect the very people responsible for training murderers, like the infamous Grisly, Sam uncovers a nefarious plot wherein AWFA has been trafficking shifters and vamps into the sex-slave trade. Can she save the very people crying out for her blood? (Also see Shifters: A Samantha Reese Mystery, Book 1)

And what's Halloween without a haunted house story?

Not all houses are made of brick and stone...
In Patrick Logan's Shallow Graves, Robert Watts is having the worst day of his entire life: first he's laid off, then he finds out that his wife is having an affair... with his boss no less. And that's only the beginning.

Before the month is out, Robert finds himself alone to raise his daughter with no money, no job, and a house that is minutes from being repossessed. Just when he hits rock bottom, a strange visitor arrives at the doorstep of his soon to be foreclosed house with a letter from an Aunt he didn't know existed.

The offer is simple: look after Aunt Ruth during her dying days, and in return Robert will be bequeathed the Harlop Estate in which she currently resides. It's a no brainer and Robert jumps at the opportunity, equally motivated by the prospect of financial security as he is for a fresh start.

Problem is, it only takes a few nights in the Harlop Estate before he begins to question Aunt Ruth's claims that they are the home's only inhabitants... - Book one in the Haunted Series. Pre-order. Releases Oct. 31.

** Be sure to stop back for more spooky books and other Halloween fun coming up!
Posted by CA Verstraete at 12:00 AM