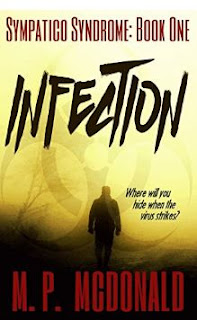 What started as a "flu" outbreak on a military base proves deadlier than Ebola and more contagious than the Spanish Flu. Sympatico Syndrome is unlike anything the world has ever seen. Victims' behavior is changing to accommodate the rapid spread of the virus.

Former Navy epidemiologist Cole Evans is well aware of the rare, infectious diseases the military studies. He also knows, first-hand, the government's stance on sharing information with the public, so if the media has already learned about the disease, then it’s far too late to contain the outbreak.

Faced with an extinction event, Cole's only chance to save his family is to establish a safe haven. Isolated, hard to reach, and with enough space for his brother's family as well, he has the perfect location--if only they can all reach it before they're infected...

Meet the Main Character:
As a former Navy epidemiologist, Cole Evans knows first-hand about deadly diseases. Faced with an extinction event, Cole's only chance to save his family is to establish a haven—an island. If only they can all reach it before they're infected...
Introduce yourself. What are you best known for?

I’m Cole Evans and I knows about viruses and understand how the military works. As an epidemiologist with the Navy for almost twenty years, I’ve seen what Ebola can do and studied the Spanish Flu. This new virus is deadly and more contagious than either and it scares the daylights out of me—and I don’t scare easily. I volunteered to go to West Africa during the Ebola outbreak and didn’t bat an eye.

I warned the Navy about the virus just before I retired from the Navy to spend more time with my son.  Apparently, they didn’t listen to me. I almost wish I hadn’t retired, but as a widower, I’ve been raising Hunter alone since he was six. He’s a good kid, but he was in high school at the time and needed me around more. Now, he’s in college and I have to figure out how to get him home safely because if this virus is out in the wild, then it’s far too late to contain it.  I have a safe place for everyone, including my brother, Sean’s family, but can we all get to it before we catch the virus?

In the Navy, my job was to save the world from a pandemic. Now, I can only save my family—if I’m lucky.

What inspired this story?

A love of apocalyptic stories and a chance read in a science news story led to an idea about a virus that at first makes the victim feel social and euphoric instead of ill. It does that so victims will gather in groups—which allows the virus to spread much more quickly than most illnesses. The name of the virus is Sympatico Syndrome.
Do you think this kind of scenario could happen in real life? Why or why not?
This particular virus, no, but I wouldn’t doubt that someday there will be an engineered virus that could be spread rapidly. As far as seeking a refuge, yes. There are many people who have prepared a ‘bug-out’ shelter for scenarios similar to the one in Infection.

Tell me a little about the author, too.

M.P. McDonald is the author of supernatural thrillers and post-apocalyptic fiction. With multiple stints on Amazon's top 100 list, her books have been well-received by readers.

If her writing takes your breath away, have no fear, as a respiratory therapist--she can give it back via a tube or two. She lives with her family in a frozen land full of ice, snow, and abominable snowmen.

On the days that she's not taking her car ice-skating, she sits huddled over a chilly computer, tapping out the story of a camera that can see the future. She hopes it can see summer approaching, too. If summer eventually arrives, she tries to get in a little fishing, swimming and biking between chapters.

Cole turned onto his street and slammed on the brakes.
Yellow barricades like police used when trying to hold back mobs of demonstrators blocked off the street. Three men with guns manned the roadblock. Cole tensed as one of the men approached his vehicle.
Sean was right behind him with the truck and Jenna and the kids following Sean. He hoped his brother wouldn’t jump out and start waving his handgun around. He was grateful for Sean’s forethought to bring the weapon, but it was three against one, and now Jenna and the kids were around.
Cole rolled his window down a crack, squinting at the man who was backlit by the sun and wearing a baseball cap pulled low. “What’s going on? I live on this street and need to get home.”
“Do you have proof of residence?”
Cole glared. “Since when do I need proof that I live in my house? My key is proof, now get those barricades out of the street and let me through.” He had his license, of course, but that wasn’t the point. He jabbed his thumb over his shoulder. “The two vehicles behind me are family. Let them in, too.”
“Cole, is that you?”
He blinked up at the face. “Who wants to know?”
The man pulled off his cap. “It’s me. Jerry Keeling.”
“Doctor Keeling? The dentist?” He’d taken Hunter to the guy a few times after their regular dentist had retired.  He’d also spoken to him at the annual block party, but he’d never had the impression the man would become militant in a situation like this.
“Yeah. We’ve had outsiders trying to seek shelter in the neighborhood. They think because we’re upscale here, that we’re safe.”
Cole bit back a retort. Their neighborhood, while nice enough, was hardly upscale. “Look, Jerry, I just need to get home. It’s only going to be for a few hours, then we’re leaving.” Crap. He probably shouldn’t have said that.
Jerry scratched his cheek, his gaze wandering to the other two men as if seeking permission. “Okay, I guess I can let you pass, but the truck and the other car will have to stay out. Only residents allowed.” He smiled as if he was doing Cole a favor.
Cole fixed Jerry with a hard stare. “Listen, Jerry, that’s my brother in the truck and his family in the red Ford. Now, unless you’re going to shoot me, they’re coming, too.”
“Who the hell are you to tell us what to do?” One of the men circled the barricade. He was taller and heavier than the short, slim dentist, and he shouldered Jerry out of the way. “We say who comes and who goes.”
Cole narrowed his eyes and straightened his shoulders. “As it happens, I know a thing or two about diseases since I’m an epidemiologist. I worked with the CDC for many years and even went to Africa to help manage the Ebola outbreak. Do you have better credentials?”

** Check out  M.P. McDonald’s other works, including the award-winning bestseller, No Good Deed, at www.mpmcdonald.com

* Be sure to come back for another great Halloween Read! *
Posted by CA Verstraete at 12:00 AM