Thought I'd share an older post today for the Reanimated Writers Zombie Blog Hop. (You'll have to join the group to see the posts. I'll include others I find.)

Since it's Halloween, what's scarier than real life monsters?

Since I couldn't copy/paste from my word program for some reason, I'm including part of a previous blog post. 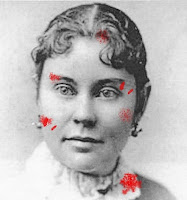 There's something truly frightening about the idea of a woman—and an upstanding Sunday School teacher at that—swinging, hacking, and attacking not one, but two people. But that is what 32-year-old Lizzie Borden was accused of doing when she was put on trial in 1893 for the murders of her father, Andrew Borden, and stepmother, Abby Durfee Borden, on Aug. 4, 1892.

A Victorian tragedy, Borden continues to fascinate today. Dozens of reasons have been given as to why she might have committed the crime—madness, jealousy, rage, female hormones, an illicit affair, incest…
No direct proof connecting Lizzie with the crime was ever found, though only she and the maid, Bridget Sullivan, were at home at the time of the murders. Did she do it or didn’t she? The jury thought not, or at least were not convinced by the lack of evidence, so she was acquitted.
When I decided to write about Lizzie Borden, I followed the timetable of the actual crime, and used transcripts and newspaper accounts as part of the story, but I  came up with an even more unique solution as to why she might have committed the crime. What if Lizzie did kill her father and stepmother… because she had no other choice?
Here’s a short excerpt:
Every muscle quivering, Lizzie fought with everything she had to keep his mouth away from her body and limbs. Her strength waning, she hoped to fight for as long as possible when Emma yelled from the doorway.
“Father!” Emma screamed. “Lizzie, what are you doing? You’re hurting him!”
A quick glance told Lizzie her sister was still not herself. Lizzie struggled to talk while she fought to keep her father at arm’s length. “Emma, help.” She panted with the effort. “Please, help. He’s sick, he’s gone insane. Help me.”
Emma finally blinked and stared like she was seeing everything for the first time. “Lizzie! What should I do?”
“The hatchet!” Lizzie pleaded. “Get the hatchet. Hurry, please hurry! I can’t hold out much longer.”

*About Lizzie Borden, Zombie Hunter: Every family has its secrets… One hot August morning in 1892, Lizzie Borden picked up an axe and murdered her father and stepmother. Newspapers claim she did it for the oldest of reasons: family conflicts, jealousy and greed. But what if her parents were already dead? What if Lizzie slaughtered them because they’d become… zombies?
Website: http://cverstraete.com
Amazon: http://getbook.at/LizzieBordenZombieHunter
Goodreads: http://tinyurl.com/hp9rvyd
** What’s your view on Lizzie Borden? Guilty or not guilty?