The Kings in Milwaukee! #horror #writing 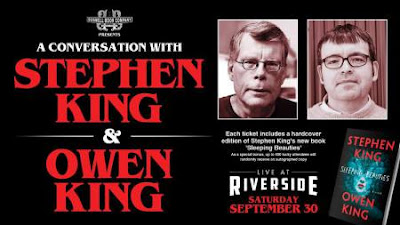 It was a banner night Saturday as the King of Horror, Stephen King,  and his son, Owen King, visited Milwaukee on one of the legs of a national tour for their jointly written, newly released book,  Sleeping Beauties. 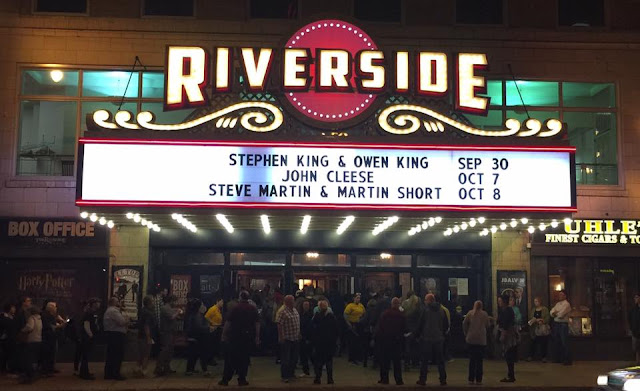 A group of us were on hand, albeit in different rows and sections, for the amazing event, which featured King and his son talking about their collaboration and other related topics. Attending were:  Rondo Award-winner Justin Hamelin, author of (THICKER THAN BLOOD), Stephen King enthusiast Will Reckling and author Christian A.  Larsen (THE BLACKENING OF FLESH) Check out his blog post on the event. I drove in with fellow author Dawn Napier (STAR PACK), and also spotted  W.D. Gagliani (WOLF’S BLIND), and David Benton, author of the upcoming novel, FAUNA. Mary McDonald, author of (INFECTION) also was up in the balcony.

In one word: wow. It wasn't a long event, the two Kings read an excerpt each, talked, and answered a few questions for just over an hour. But it was enough. The one drawback was that the theater was kept totally dark - I mean pitch black - with only the stage lit. Makes note-taking near impossible. But years of taking notes and interviewing came into good practice. Pretty proud of myself that I was able to write fairly legibly and keep the lines spaced - without seeing what I was writing!

** NOTE: I'm writing this in two parts. Come back tomorrow  for part two - for both men's thoughts and advice on writing. 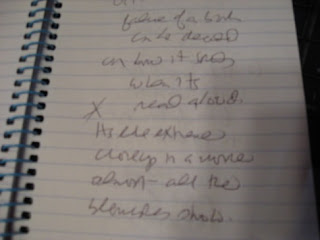 Following are some of the memorable quotes from the evening (at least to me). A warning: anyone who follows King knows he is very opinionated politically and the two men also use f-bombs quite liberally.

This is a huge 700+ word book. The premise of Sleeping Beauties is that women all over the world are disappearing, going to sleep, shrouded in a cocoon. 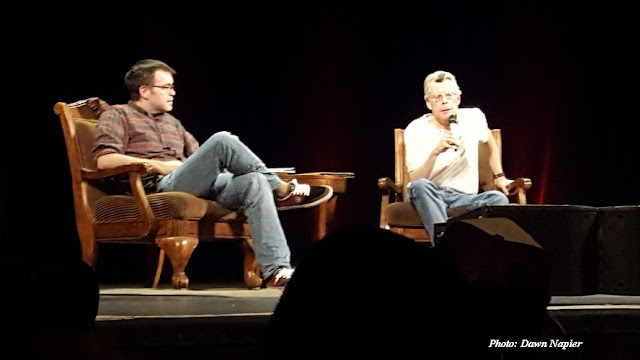 Comments on the book:

Stephen King:  What kind of world is it "when a sex that produced Donald Trump and Kim Jong-un, a sex that cannot even fold a shirt, is left in charge..."

SK: "We got a ton of wonderful reviews and some sh** reviews..." In one commentary, someone said. "one surprise is one character is a talking fox. As far as we're concerned, that shouldn't be a surprise at all."

Owen King: Talking about a game at home with the family. "What we all like to do is pitch ideas. In this case, I thought of the worst things that would happen and thought of my dad. This one I brought to him."

SK: "I thought it was too good not to do it. I would've felt like a thief if I'd taken it." So they decided to collaborate. "I got a chance to work with my son on a book. To have any kid want to collaborate with you on a long form of art is just a gift."

SK: In trying to weave one narrative so that it would be one story and not recognizable as Owen's part or his part: "Owen said we'd put brackets in the center and fill it in, and it'd be the most rotten place. That way it felt like weaving. That was kind of fun."

OK : "We also rewrote each other." When asked what he would say to his father if a part sucked, he said. "You just tell him. That never happened. A couple times I'd say I'm not crazy about the idea..." Or he said his father would say he didn't like something he did: "We'd find another way to agree, to make it work."

On movies: Their favorites?

On Stanley Kubrick's version of The Shining (1980, with Jack Nicholson and Shelley Duvall):

SK: "It's like a beautiful shiny Cadillac that didn't have an engine in it. When I started the book, you bend a black piece of metal and see if it will break. I saw (Jack) Torrance as a tragedy and the hotel worked on him.

"... I said, Jack Nicholson was crazy... he had nowhere to go. Even then I thought Shelley Duvall was a scream machine. If I do it again as a TV series, I'd give it room to breathe." 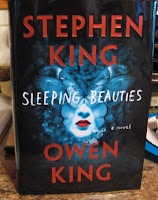 OK: On his father's choice about signing the books in blue ink instead: "He said, 'I'm not signing with that. Black is death.' I said, he's such a f**** weirdo. He has so many superstitions." To which the father agreed, "Yes, I have a fair number of superstitions."

And speaking of signed copies - they had 400 books at the event that had been pre-signed. Then the event organizers said they mixed the books so they'd be distributed randomly. I really didn't expect to get a signed copy.

So this BIG surprise when I got home and opened it: Cool or what???

Funny thing: I was in a line that the person distributing them had to grab more books, so I took the second book on the stack from the next person. How fortunate was that??

Don't forget to come back to the blog tomorrow for part two on Stephen and Owen King, and their thoughts on writing. 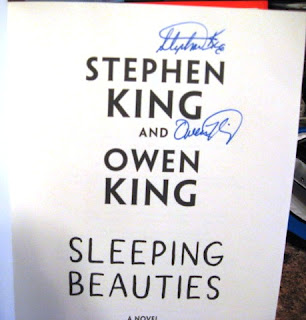