There are all kinds of spooky stories, excerpts, contests and more.
I'll be sharing a couple creepy little stories too!

See the Facebook group for all info.  Be sure to visit the rest of the stops and see my story below. *  See the Halloween Horror Giveaway 1 and Giveaway 2! 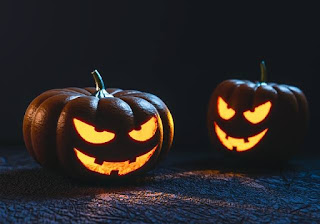 The Pumpkin Patch
By C.A. Verstraete

Every year he sat in the pumpkin patch, waiting for that one special person to come his way.
Day after day, he grew larger and a vivid, brighter orange as he turned into a grand specimen of the pumpkin family.
Then it happened. A cute little boy with a big smile and freckles almost as orange as his skin came and picked him up.
The boy’s hug felt nice, so good, just like his ancestors had told him it would.
The others rustled their big green leaves on the vine in goodbye as the man carried him to the family’s car.
He rode to his new home nestled in the arms of the boy. He relished the warmth of the boy’s hands around him. The pumpkin patch seemed far away now.
The boy insisted on carrying him in. Wait, what was that? A flash of orange on the porch step caught his eye. Another pumpkin. But-but what was wrong with that pumpkin’s face?
He didn’t have the chance to see enough as they carried him inside. A rustle of paper. He sat on the table waiting to be set in the place of honor. That’s all he’d heard as he grew up in the pumpkin patch—that the one chosen had a place of honor in the family’s home.
“All right,” the father said. “Scary or funny?”
“Funny!” the boy cried.
Wait . . . what-what was happening? ARGGGH! Something sharp cut into his brain. No-No! What are they doing?
Oh, the pain! The cutting, the searing pain, the stabbing, seemed to last forever.
Then the worst came. The horrible humans dug inside, scooping out his innards—his heart, his brain—until he sat there, nothing but an empty shell.
Through the magic of the pumpkin patch, he still felt, though. He still followed their motions. The little boy, who had seemed so good, so loving, turned his gap-toothed smile of terror in his direction. The man gave an evil leer and leaned ever closer with that instrument of torture.
He quivered in fear as the man cut into his soft, tender flesh. One cut, and then another, and soon a big evil smile with five little pointed teeth decorated his face.
In surprise, he blinked, his vision sharp and clear as the man cut two triangular eyes above his newly formed mouth and nose.
The electric candle they put inside him gave an eerie glow and lit the space around him. He looked out from his place of honor by the fireplace, listening as the house quieted and the family went to bed.
Slowly, carefully, he rolled and bumped his way off the fireplace bricks. He slid along the wood floor, going down the hall. At the door, he stopped and listened to the soft breathing where the little boy slept.
Longing filled him.
Chomping his teeth, he slipped into the room without a sound, eager to be with the one who had given him new life. ##