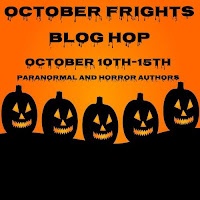 How about some more tasty horror morsels
for the October Frights Blog Hop?


There are all kinds of spooky stories, excerpts, contests and more.  See the Facebook group for all info.  Be sure to visit the rest of the stops at the end of this blog. *  See the Halloween Horror Giveaway 1 and Giveaway 2! 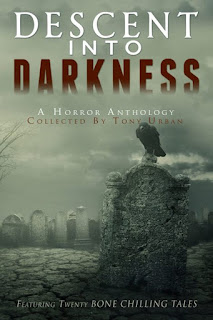 What keeps you awake at night?

Demons and forces of evil...
Ghosts and urban legends...
Dive into the darkness with twenty tales of terror that will keep you awake long after the lights go out.

A horror anthology featuring featuring several best-selling and award-winning authors from around the globe, "Descent into Darkness" contains a variety of terrifying short stories and novellas.

Includes:
Baba by Tony Urban - Blood Note by Sylvester Barzey  - Nail Gun Glissando by Steve Vernon  - The Evil in Devil’s Creek by Paul B. Kohler  -  What’s Been Keeping Me Awake by Amanda Luzzader  - Mark of Perdition by R. L. Blalock - The Sun Makes Me Turn Purple by Gretta Penelope - Send in the Clowns by David J. Schmidt - The Nine Lives of Captain Osborne by E.E. Isherwood - They Want to Die, Let ‘em by L J Parker
Simon Says by Rachel McClellan - The Door by Delia Rai
Thirteen Horses by C.A. Verstraete - Zombie Apocalypse by Max Lockwood
Fetch by Joe Jackson - Knock, Knock by Cindy Carroll
His Model Son by Brian J.W. Lee - Ascension by G M Sherwin
Through a Dark Wood by Shayne Rutherford - Lock and Key by Patrick Logan

I asked a few of the authors to give me some details on their stories. Here's what they said:

Paul B. Kohler - The Evil in Devil’s Creek.

About the story:
A road trip to visit Sheri's son turns deadly when Owen runs over a stray dog in the road. As they look for help, their fear climbs when they discover the nearby town deserted . . . but only of humans. There are others watching.

What inspired the story?
“I was inspired to write this story after a dozen or so trips to visit my daughter in college. Several of the oddities along the way are included in the story. The scary stuff was added because of my wandering mind.”

Quote from The Evil in Devil’s Creek:
Blood, rusty and dirty streaked the walls and countertops and left dried lakes on the floor. With a shaky voice, he called out again, “Hello? Is there someone—anyone?” But the hollowness in his stomach told him he was alone.

About the story:
A couple think they're being set free from jail, accused of a crime they say they didn't commit. But sometimes the punishment does fit the crime...


What inspired the story?
A couple had been arrested after a number of horses were found dead on their property. The story stuck with me. They continued to say they were not guilty but were out on bail. The husband killed the wife and himself once they were found guilty and sentenced.

That wasn’t the only odd thing, she realized. The shadows…
In the few minutes since she’d come in, they’d edged closer. They now stood right behind her, almost as if—
As if they’re following me. How can that be?

** C.A. Verstraete is the author of Lizzie Borden, Zombie Hunter and The Haunting of Dr. Bowen. Learn more at her website, www.cverstraete.com.

After seeing a murdered girl in the forest, Phil convinces his two best friends to visit the scene, unaware that they were hiking into a nightmare.
What inspired the story?


I've always loved coming of age horror stories and wanted to put a darker, realistic spin on it.


They had long blonde hair which was dirty and matted. Blood from the holes in their torsos swam up their bodies and formed rivulets on their upside down faces.

** Tony Urban is the author of the Life of the Dead series. The third book, The Ark, just came out.

All hell breaks loose as dark forces connected to an ancient secret in Pulau Purba sweeps through the island. An old gun technician working in a remote military base there must learn to overcome both physical and mental threats to reach his son, a conscripted marine.


What inspired the story:


My real life experiences in the military, of real conscripts coming to terms with a life they're unsuited to. Local folklore amped up a thousand times to a point where it doesn't resemble the original source material And of course, Stephen King, H. P. Lovecraft.


Quote from His Model Son:
Help was further than Boon Teck thought, and so was his breath.

** Brian J.W. Lee is the author of a horror story collection, Through the Abyssal Gates.
* * *
Delia Rai, The Door

What is the story about?
Not all doors are meant to be opened.

What inspired your story?
I was talking to a friend about writing inspiration and he said, you know, there are many writing prompts online, you should do a search and see what you can find. I did just that and found this: "You know...there is nothing as tempting as a locked door." All my horror bells went off at once and I sat down to write. The prompt became the first line in the story.

Quote from The Door:
“A locked door, a red scarf, a tiny key, an old paperback. I say these words again and again, a litany of sorts, or a spell meant to reveal something. The devil is in the details. And yet there are no revelations.”
** This is Delia Rai’s first published story. She is working on a short story collection and her first fantasy novel, and is aiming for 2018 publication.
* * *