* For more details & the next stops on the Blog Tour, see the BookReviewCrew page.

A future where offline privacy is illegal. A lethal plot permanently deleting people in power. One determined genius caught in an assassin’s sights.2037. Dr. Cole Westbay is proud of having helped eliminate crime. Groomed to take over the company that makes the surveillance chip everyone is required by law to have, he’s alarmed by a series of suspicious deaths the hardware caused. And after launching an investigation, the brilliant scientist panics when he awakes with his mandatory neural link ripped out and his recently recorded memories erased…Arrested for the federal crime of failing to have his life fully documented, Cole struggles to get back online and clear his name. And as his paranoia grows while the bodies continue to pile up, he fears government enforcers, friends, and even his fiancée may be in on the scheme to set him up for a deadly fall. Can the embattled scientist crack the conspiracy before his enemies hit CTRL+ALT+DEL on his life? 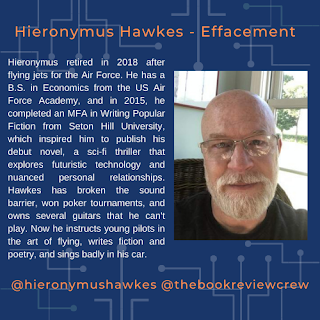 I read the blog of Charlie Stross, a Scottish science fiction writer, and he talked about the keynote address he gave to the USENIX 2011 conference in Boston on what the future is going to look like up through the next 500 years. He talked about lifelogging and how it will be a disruptive technology within 20 years.

If you had to live in this setting, what would you choose and why?

It’s only 15 years from now, so most of us will be living in this setting potentially. The only real difference is the neurochip in my story, but similar technology is already being developed, so who knows. I would likely embrace the neurochip, since I’m usually an early adopter of technology.

What were the hardest and easiest parts of writing this book?

The hardest part was making the main character relatable/likeable, which are two different things. I wanted to write about a person that is dealing with anxiety disorder, but not make them come off as too whiny. I don’t think I accomplished that in the first iterations. I ended up doing a gender swap for most of the characters and it opened my eyes to how I was depicting a few of the characters and it really informed my rewrite.The easiest part? Probably writing Kasia, she has a real attitude, and she was really fun to write. I am playing with the idea of doing another novel centered around her.

I tried to give them all depth. Nobody is one thing, all good or all bad. My antagonist is presented more one-sided, though. I had originally written him with a softer side, but I think him being more menacing works. He does have a mother, though, and he loved her. =)

I used some of my own life experience to inform the characters life choices. Especially Cole, as he wanted to get married early. I did too. It didn’t end well for me.

I had written a book, quite badly, by the way, and had some friends be honest with me and let me know how bad it was, so I decided to go back to school and get and MFA in writing. This story was based off my thesis novel, although it barely resembles it now. I learned a great deal. Certainly, and MFA is not necessary for everyone, but I had been out of school for more than twenty years and hadn’t paid that close of attention in my English classes, so it really helped get me back to where I needed to be. I was lucky to get a really talented mentor as well.

I’m working on a space opera trilogy…vampires in space. The first book is basically done, and I am writing the second book as we do this interview.

Effacement isn’t really designed to send a message per se. the idea is to entertain. But, hopefully we learn to take personal privacy seriously going forward into the future. Social media is a very important part of so many people’s lives now, especially among our youth, and I can see where we can go off the rails if we don’t pay attention. 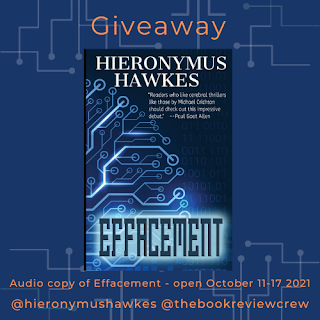 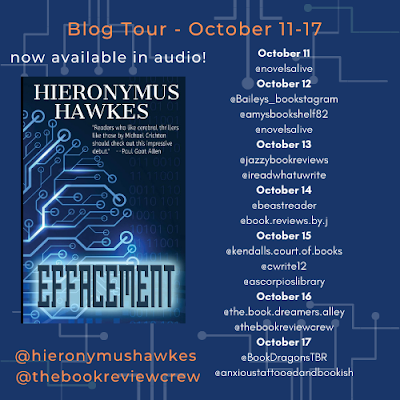