Today, we're spotlighting horror writer Alisha Adkins.  Alisha  is the author of Flesh Eaters, Making the Best of the Zombie Apocalypse, Daydreams of Seppuku, and Twisted Tales for Twisted Minds. She is a native of New Orleans and has also lived in Dallas, San Francisco, and Nagasaki Prefecture, Japan. Alisha holds a master's degree in education and worked as a secondary English and history teacher for ten years before escaping the profession. She has also worked as a bartender, owned and operated an eBay Powerseller store, acted as a forum moderator for a popular online game, and worked as an educational consultant for a major publishing company. She says she is currently pursuing her dream of writing and quietly starving to death.  Read more about her and her works at
http://rhapsodyinlime.blogspot.com/.

In New Orleans, the outbreak brings with it carnival carnage, Mardi Gras mayhem, and zombies on parade. Zombie Gras follows the lives of three survivors: a tourist who may never go home, an elderly shopkeeper trying to wait out the zombie apocalypse as if it were another hurricane, and a young man and his girlfriend who conduct volunteer rescues around the city. In this novelette prequel to Flesh Eaters, Alisha Adkins delivers a darkly humorous tale that also serves as a parable, chillingly paralleling the strife wrought by Hurricane Katrina and recognizing the resilience of New Orleans' spirit.


Why write about zombies?

I've always been drawn to zombies.  As an archetype, to me they represent loss, defiled memories, and the struggle for survival.
But what is most interesting is how people react to them. Their presence strains human relationships, forces characters to adapt to adverse situations, and reveals how easily people can accept formerly taboo behaviors.
Zombies are dangerous, but although they may kill you, it won't be with any special cruelty or malice.  Their motivations are basic and transparent.  They're just hungry.  It's the very base of Maslow's Hierarchy of Needs; you can hardly even blame them for trying to eat us.  The living, on the other hand, are far more devious.  What people are capable of can be truly terrifying.

It's a human eat human world out there. Adrienne awakens one day to find herself inexplicably thrown into a world populated by the undead and soon learns that, in order to survive, she must adapt by eating the dead -- before they eat her. Assuming the role of protector of an abandoned young boy whom she befriends, Adrienne embarks on a hunt for both survival and meaning, struggling to keep them both alive, remain sane, and to preserve her humanity. Flesh Eaters is an irreverent tale of zombies, cannibalism, and self-consumption. Mixing survival horror with smatterings of postmodernism, existentialism, black humor, and nihilism, Alisha Adkins, in this debut novella, weaves a graphic and disturbing story while also making a stark statement about humanity.

Making the Best of the Zombie Apocalypse

Extreme circumstances dictate extreme behaviors. Nathan cares for his incapacitated zombie mother. Tempest runs dangerous jobs for black market agents while trying to keep ahead of her past. Meeting at a support group for apocalypse survivors, they discover that each may have what the other needs.

What else do you write?  What’s next for you?
I write mostly supernatural and psychological horror.  My most recently published book is Twisted Tales for Twisted Minds, which is a collection of short stories.
My current project, Shadow Schism, is a novel I'm rolling out in serialized form.  It's based around Jungian psychology.  In it, the collective unconscious is dying, and rifts are forming between physical reality and the shadow world.  Shadows are leaking through the cracks, invading our world.  Nick, our protagonist, is an unlikely, and not altogether willing, hero, but when psychoids begin to appear  to him in the form of animal totems, he has no real choice but to listen to them.  He needs to find a way to close the rift between worlds before it's too late. 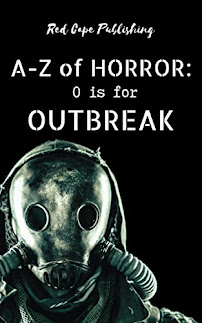 Includes my story, The Rumor That Refused to Die