A Kid's Story of Haiti and Zombies by Jinx Schwartz 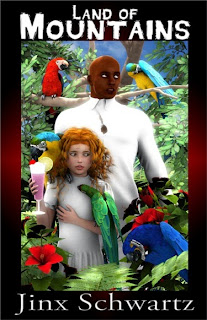 Today we offer a glimpse into what may be the "motherland" of voodoo and zombies -- Haiti. Author Jinx Schwartz offers a look at a land of color and freedom in her kid's zombie book, Land Of Mountains, also an Eppie Award finalist for Best YA

(And most interesting -- it's inspired by real life - the author lived in Haiti - and likely saw a "real" zombie!)

About Land of Mountains:

A 10-year-old’s new home on an exotic Caribbean island proves so fascinating she quickly forgets she didn’t want to leave Texas. After all, where better than a jungle world teeming with voodoo, mystery—and a really pesky zombie—to indulge her favorite pastime: snooping.

Lizbuthann (her real name is Elizabeth Ann, but no one calls her that) and her best friend, Doux Doux Boudreaux, ride horses through jungles, swim wild rivers, spy on the general population, and generally have a grand old time in a land they think is paradise--and grown-ups consider a nightmare.

Inspiration behind the book:

As the book recounts, the family flew from Miami to Cuba, spent the night in Havana, then on into Port au Prince the next day. My father was already there, where he was working for a large Texas construction firm to build a dam. I was nine, and we left when I was 13.

From the minute we arrived we heard about Zombies and voodoo. For a kid from Texas, this was a fascinating, if a little scary. Our mode of transport was company trucks, or in our case, my father had a car.

One night on our way back from a shopping trip to Port au Prince (60 miles away from the camp we lived in), we had a flat tire. Our driver was replacing it and we were standing around while he worked. He suddenly yelled, "Oooh-gah-oooh!" (zombie!) and shoved us inside. In the headlights was a large man, who walked as if in a trance. He walked right by us, but we were convinced, as was the driver, that we had seen an honest to goodness zombie.

Land of Mountains, which is what Haiti means, is a fictography, a greatly embellished account of my years in Haiti, told from the point of view of a little girl. It is both a coming of age and a kid's adventure.

Me and my best friend did ride horses through jungles, swim untamed rivers, and snoop a lot, but I only met one Zombie, though we were sure there were plenty more about.

One of my favorite lines from the book tells a lot about the freedom Lizbuthann had to roam.

Once in a while we’d take a new path, go over one too many a mountain, and get lost, but we almost always ran into someone walking along the trail, and since Daddy put out the word on the jobsite that there was a standing reward of a dollar to any Haitian who brought us home, we were pretty safe.

Excerpt from Land of Mountains:

Doux Doux Boudreaux was a year older than I, and a foot taller. She also had a head of unruly white-blond hair cut in an attempt at a Buster Brown.

Her real name was Dorcas, but her nickname, Doux Doux, was pronounced Doo Doo. Doux Doux means sweetheart in Creole, but we enjoyed getting away with the slightly naughty play on words.

The Boudreaux bunch was from east Texas, but Uncle Lloyd said they were really Cajuns from the bayous of Lousy-anner.

Daddy explained that Papa Boudreaux was a Cajun and that’s why he and all his kids talked funny. Doux Doux didn’t speak Cajun or Creole like her father did, but she had his habit of starting sentences with “Mais, cheré,” Cajun for, “But, dear.” She pronounced it “Maysha-ray,” rhyming with “ray” instead of “ree.” She also used a lot of dis’s and dat’s for this and that, and would say things backwards, like, “five or four miles down de road,” instead of four or five. I thought she talked just fine, but when I tried it at home it went over like a poot in a pew.

(Note from Chris: And for something different - check out my annual, two-part Christmas miniatures story by author Robert W. Walker at my other blog. )
Posted by CA Verstraete at 12:00 AM