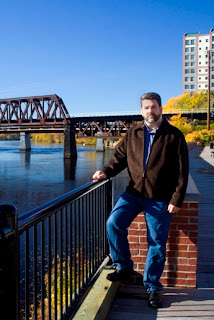 Today we welcome CHRISTOPHER GOLDEN, New York Times bestselling and Bram Stoker Award-winning author of such novels as Of Saints and Shadows, The Myth Hunters, The Boys Are Back in Town, and Strangewood. He also edited the short story anthologies The New Dead, The Monster’s Corner, and 21st Century Dead.

, his first horror novel in a decade, comes out in January 2014.

tells the story of the inhabitants of  the small New England town of Coventry who had weathered a thousand blizzards . . . but never one like this where people were never seen again... Twelve years later another storm is coming... and one resident gets a call from a man--who died 12 years ago... Old ghosts will make this storm more terrifying than the last... 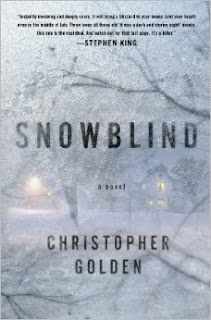 A 1989 graduate of Tufts University with a BA in History and English, Golden first worked for three years in what he calls his "only real, full-time office job" at BPI Communications, the then  parent company of Billboard Magazine, The Hollywood Reporter, Back Stage, and a host of other magazines.

"It was a wonderful experience," he says. "When I sold my first two novels in 1992, I gave my notice and never looked back.  Though, to be honest, for years I had a recurring dream that I went back to work there, so I know I missed it for a long time."

He began writing in college, but he admits it didn't look too promising--at first. "I wrote a few short stories and didn't get much traction with them," he says. "My senior year in college, I started writing OF SAINTS AND SHADOWS.  That summer, I went to NECON  (a small writer's conference in New England) for the first time and I met the woman who would become my first agent, as well as the editor who bought my first book (non-fiction) and my first two novels.

Christine Verstraete asked Golden some questions about his work and this is what he had to say:


How did you begin in horror fiction? Why horror?

CG:  I always say that the horror people are my people, and that's definitely true.  They're where I feel most at home.  But the truth is that if you go back and try to categorize my work over the past 20 years, only a handful of those things is easily stamped with the horror label.  That said, when I was writing my first novel, OF SAINTS AND SHADOWS, I definitely thought of it as horror.  Or, at least, as partly horror.  I remember that when I was writing it, I told someone that act one was mystery, act two horror, and act three big over the top action fantasy.  With demons.  As to why horror…I don't know. I always gravitated toward the dark and the weird.  As a kid, I loved horror movies and TV shows and comics. Twilight Zone reruns and old monster movies were my bread and butter.

What has been your favorite setting or character, and why? Do you find yourself returning to it?

CG:  As much as I love big dark fantasy weirdness, I always find it a relaxing, comfortable thing to return to the mundane, to the lives of ordinary people and their flaws.  One of my favorites amongst the characters I've created is Doug Manning, from my upcoming novel SNOWBLIND.
He's a guy who never had much direction in his life, has made a lot of bad choices and is making more, but just wants to be better.  He's got a lot of resentment, but love inspires him.  I think of Jack Nicholson in AS GOOD AS IT GETS, when he tells Helen Hunt that she makes him "want to be a better man."  How can you not love a character like that?

Who and what inspires you?


CG:  My wife, Connie, inspires me just by being a loving, supportive partner.  My kids inspire me with their brilliance and their humor.  My friends inspire me with their loyalty and their determination and, for those who are also writers, with the great work they are doing themselves.  Writer-wise, I'm always inspired by a novel that touches me or excites me, which includes authors I've loved for decades like Stephen King and John Irving, and authors I've only discovered in the past few years, like Daniel H. Wilson, Ernest Cline, and Erin Morgenstern.  I'm also very inspired when I see a writer with promise fulfill that potential, as my friend Rio Youers did with his extraordinary novel WESTLAKE SOUL.

Describe yourself  - what kind of writer are you?

CG:  I'm a working writer with no patience for writer's block and what I consider a significant work ethic.  One reviewer referred to me as a journeyman writer, and while I suspect it wasn't a compliment, I chose to take it as such.  My friend Mike Mignola once told me that he thought I would've been right at home in the pulp era, because he thought I could write pretty much anything well.  People don't give the pulp writers a lot of respect, but those guys knew everything there was to know about work ethic and versatility.  I don't write as much or as fast as I used to, but that's just a function of getting older.  (I'm 46.)  As for genres…I'm a writer, period.  Yes, I'm often a fantasist or a horror writer, but I've written mysteries and thrillers and lots of non-fiction.  I've written comics and video games and screenplays.  I write less, as I said, but I still write and have always written for myself, following the things that interest me.


If you could go one place in one of your books or stories, where would you go and why?

CG:  Under the pseudonym Thomas Randall, I wrote a trilogy of teen horror novels called THE WAKING, which is set in a beautiful location in northern Japan.  I did a ton of research for those books but have never actually been to Japan myself, and I would absolutely love to do that.


Do you have a favorite line or short paragraph from one of your stories or books?

CG:  I put a lot of stock in opening lines, so I often agonize over them.  The one that comes immediately to mind is from my novel THE BOYS ARE BACK IN TOWN, which begins:

"The world was still solid and reliable that chilly October morning, but it would not stay that way forever. Or even for long."


How about some advice to writers  - what is the best way to get your work noticed with thousands of books/stories out there?

CG:  To quote Neil Gaiman, "make good art."  But I'd add that, of course, you have to share that art with people.  Go to conventions and meet other writers, agents, editors, artists, readers, book collectors.  Create a site or blog to share your work online.  If it stays in your computer and nobody  ever sees it, you're finished before you've begun.

Now for the Z topic - Zombies. What is it about zombies that keeps you interested?

CG:  I'm not interested in zombie fiction in general, but I do pay attention to it because I believe that when it's good, it can be truly great.  It's a great vehicle for social commentary.

There have been rumors... are they... gasp.... (truly) dead? Is the trend dying out?
CG:  I think the zombie love has plateaued, but I also think that, like vampires, they're now never going to fall below a certain level of pop culture interest specifically because they're such a versatile tool for storytelling.  And if you judge by the ratings for THE WALKING DEAD, they're getting more popular by the week.


CG:  I've stopped reading the comic book series and though I love the TV series I do find it frustrating for the same reason I stopped reading the comics.  I think of the scene in the film STAND BY ME when the boys are talking about WAGON TRAIN and one of them explains his disinterest by saying that they never seem to get anywhere, "they just keep wagon training."  That's THE WALKING DEAD to me.  I still love it, but the sloooooooooow story develop is starting to put me off.


Getting personal... what don’t we know about you?


CG:  I could fill hundreds of pages with that, but the one that always seems to surprise people is that I love musical theater and have performed on stage as well as directed youth theater productions.  I also sing, and have been known to do so at odd times.  If there's a live band and I see an opportunity at a wedding or party to join them for a song, I'll jump in and do that.  One of my favorite impromptu musical moments was when I crashed the late Andy Hallett's karaoke party at Mid Ohio Con and dueted with him on "New York, New York," with the Soup Nazi singing backup.  Seriously.


Do tell, what's the one thing you’ve wanted to do--and haven’t yet. (besides writing?)


CG:  Cruise the Danube.  Hike the Great Wall of China.  Star as Arthur in a production of Camelot.


CG:  Pretty much everything I've done in the past couple of years comes out in the same month, January 2014.  My novel SNOWBLIND hits from St. Martin's Press.  My graphic novel collaboration with Charlaine Harris, CEMETERY GIRL, will be released from InkLit.  I've edited a new anthology called DARK DUETS, featuring first time collaborations from wonderful writers including Charlaine, Rachel Caine, Kevin Anderson, Sherrilyn Kenyon, and so many other talented folks, and that's out from Harper.  And my final Peter Octavian/Shadow Saga novel, KING OF HELL, which be out from S&S in the UK and straight to ebook in the U.S.


CG:  Only because it's been the subject of much conversation in my life lately, I'll share one of the things I've been telling my kids since they were tiny.  At the end of your life, the only thing that will really matter--the only thing--is whether you were kind.  So be kind.

Good advice, and great ending. Christopher, thanks for sharing your work and advice with us. Stop by again!

* About Christopher Golden: He has co-written three illustrated novels with Mike Mignola, the first of which, Baltimore, or, The Steadfast Tin Soldier and the Vampire, was the launching pad for the Eisner Award-nominated comic book series, Baltimore.  He is editor of the short story anthologies The New Dead, The Monster’s Corner, and 21st Century Dead, and has also written and co-written comic books, video games, screenplays, and a network television pilot. His original novels have been published in more than fourteen languages in countries around the world.
* See more of his work at his Amazon.com page.