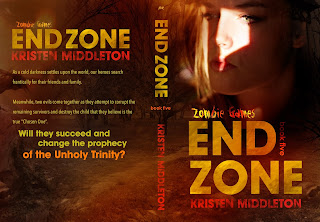 Not only is it the end of 2013, which I must say was a wonderful year, but also the end of my
my first paranormal series, Zombie Games. These five books meant so much to me and I have to admit, I already miss the adventures. Many of the characters were derived from people close to me; the others that I created from scratch, well, they became very real and special as well. Their voices would fill my head and I'd just type, wondering where they'd take me. Did I know where I was going with the series? Not really. I started out zombies but it somehow turned into demons and well... if you've read the books, then you'll know what happened next. Anyway, here is a sample from Zombie Games Five (End Zone).


I stood up and walked to the large bay window and stared outside. It was dark, well past midnight, and the yard looked like something out of a horror movie massacre. I glanced at the slaughtered zombies sprawled out all over the lawn and wondered if Bryce and the others were having problems with any more undead.
“You see them yet?” asked Paige.
I looked over my shoulder at her. “No. They’ve been gone for over an hour. I can’t believe it would take this long to find something in this neighborhood.”
Paige walked over and stood next to me. “It’s finding a large enough vehicle with gas in it that’s difficult, I’m sure.”
Before I could answer, a zombie staggered into view from the side of the house. We watched as it wandered into the center of the yard and then stopped under the moonlight, swaying back and forth. Like the others, it was in rough shape, with its bloody torso and stringy decayed flesh barely covering bone. This one also had a stump for an arm and was one the verge of losing its ratty flowered dress. With her long red hair, she reminded me of Eva a little, and I couldn’t help but shudder.
“It’s pretty bad when you see something like that and it doesn’t even shock you anymore,” said Paige as we stared.
The zombie turned around, as if it heard us talking, and started in our direction.
“Oh, great,” said Kristie, now standing behind us. “I hope it doesn’t attract any other ones that may be hanging out in the other yards. They’re much scarier in packs. Like rabid dogs.”
The zombie, now clearly on a mission, stumbled up the first two steps and then tripped on the third, landing on her face.
“What a life, huh?” sighed Kristie, staring at the zombie with empathy. She shook her head. “It’s just a damn shame. I’ll bet that girl had it all before. Now, she’s just a walking corpse with her bra hanging out and her dress stuck in her panties. Kind of reminds me of college. Those parties were crazy.”
“Actually, if you think about it, they don’t have it too bad,” said Paige. “Think about it - no cares in the world except finding food. They’re not conscious about how they look, if they need a shower, or what may have happened to their missing arm. Nothing matters but finding food.”
The zombie slowly lifted itself from the ground and then staggered to the window. Placing a hand on the glass, she stared at us silently with her pale eyes.
“I don’t know what’s creepier – her staring at us or us staring back. What do you think she’s thinking?” mumbled Kristie.
“Remember going to the bakery and staring at all of the donuts through the glass?” said Paige. “Thinking they all looked so yummy.”
I grimaced, and the zombie’s black lips pulled up into a black toothy grin, as if it knew what we were talking about. Its eyes traveled slowly to Kristie, who took a step back.
“Okay…why in the hell is that thing smiling at me?” she asked in a strained voice. “Like it knows something that I don’t.”
Page smirked. “Hell, I think she just found her donut.”

To read more, check out the Zombie Games series...


Happy New Year Everyone! Have a Fun and SAFE night tonight
Posted by Kristen Middleton / K.L. Middleton at 12:00 AM