Since we're all about monsters here on the blog, thought I'd share news about fellow author Stephen D. Sullivan's latest release. (He also wrote about his memories of The Creature from the Black Lagoon for us here during Monster Week!)

is now available in ebook format and for Kindle. And trust me, if you like Godzilla and old-fashioned monsters, this is a good one!

** Why a serial? Read more about the Story Behind the Story!! ** 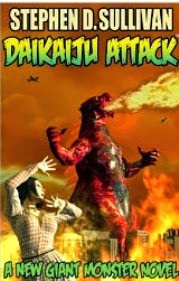 It’s 1966. The Space Race has blasted off, the Cold War is heating up, and Giant Monsters are attacking Japan!

News photographer Akiko Natsuke’s life fell apart when she caught her boyfriend cheating. But she didn’t expect that night would literally herald the End of the World -- not until she found the creature lurking in the meteor crater. Now Japan’s top scientists and military brass are racing to protect the country from rampaging monsters, while Akiko finds herself caught between salvaging her personal life … and saving the world.

Harkening back to the glory days of Japanese kaiju (rubber monster suit) films, Daikaiju Attack is filled with action, drama, rock and roll, and -- of course -- Giant Monsters. Fans of the classic Godzilla movies are sure to enjoy this fast-paced novel! - (from amazon)

Stephen D. Sullivan is the award-winning author of dozens of novels and stories, including trilogies for Legend of the Five Rings, Spider Riders, and Dragonlance.