Full posts are  at the DyingDaysZombie blog.

(I am adding excerpts here below once the posts go up.) NOTE: Some books I post here may vary from the blog so be sure to go to the site. You'll still find all kinds of great books to read - some new to you (and me too!)

Zombie films serve as a great lens to examine concerns society has about modern science. Let’s face it, when it comes to horror movies, science has a bad reputation. Blind ambition, experimental serums, and genetic experiments are often blamed for the giant monster terrorizing the city or the reason aliens are taking human prisoners or the cause of the dead rising from the grave to consume living flesh.

Using film, literature, and interviews with experts, this book examines how zombies portray real-world fears such as epidemics, mind control, what may or may not exist in space, the repercussions of playing God, and the science behind the fears.

Science has made it possible for us to live the way we do; it has given us numerous advances in all fields of life from medicine to agriculture to entertainment. Yet, with all of these advantages, there are a multitude of disadvantages that could prove to be detrimental to humans and society. Weapon technology used in wars is one of these major disadvantages, but anything that is beneficial to humanity, including medicine, has the potential to harm us. My goal is to explore how zombies become a metaphor for our fears of science and what could happen if science gets out of hand.


Throughout this book, I examine the fictional world of zombies and the real world of science. Often, I refer to “truths” about zombies, but since they don’t really exist, these are “truths” that exist within the context of zombie films and books. Read the rest…

You know what? For a smart guy, I’m pretty fucking stupid. I’m not a big believer in the afterlife or heaven or God or anything like that. But one thing I do believe in is karma. I’ve just experienced it too much to ignore it. My whole life has been one long chain of spiritual cause and effect events. I should know better than to jinx myself by saying, “At least I’m still moving.”

“What the fuck?” I say. “What’s wrong now, you piece of shit? Huh? You need a binky? Baby need its fucking binky?”

I look at the dashboard and slap my forehead. 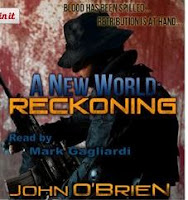 On the edge of the pipes between the two hallway corners, I lie on my side with my suppressed Beretta in my hand, listening for the sound of the guard returning. It takes a while but, even though I don’t hear the door he went through opening, I do hear his footsteps echoing off the walls. I hear the beep of the keypad next to the door and the lock clicks. Disregarding my pounding heartbeat, I roll off the conduits.

The guard swings the door open as I hit the ground just behind him. He starts to turn at the sound but I shove him through the door before he gets the chance. He stumbles inside with a yelp and I follow hard on his heels. I instantly take in the surroundings; a wall of monitors opposite the door with a bank of equipment in racks to the left. Sitting in front of the monitors are two additional guards who turn at the sound of their comrade. Without hesitation, I lift my handgun and fire. Read the rest…

John Palisano Teaser
Author of Dust of the Dead

An excerpt from Dust of the Dead:


It’s been ten years since the dead came back to life. Things aren’t like they were in all the zombie books, movies, and TV shows. There weren’t really independent bands of rogues battling it out. Things never really got too traditionally post-apocalyptic in that way. Instead, it was more like the world went into lock down. The best way I can describe it is that we all had curfews, and it was like living in the bad part of the city, no matter where you went in the city. You had to be mindful. You had to keep a look out over your shoulder. One of the undead might spring out from behind a car or dumpster. But there weren’t hordes of them. Well, that’s not true. There were, but they were mostly gathered at cemeteries. And really? They pretty much stuck inside, and with their own. Most were too confused, or too stupid, to go much farther than from where they’d found themselves. That made them easy to take care of. That was what the Reclamation crews were for. Man, that was a bad job. Most of the time, their main gig was to go into cemeteries, dig up the newly reanimated dead, who were still stuck in their coffins, and put them out of their misery, for what everyone hoped, was the last time. Reclaim them as dead. That’s where I came in. Read the rest…

Teaser for Contain (a BUNKER 12 title)
“Phones are down.”
“Phones? How is that even possible?” I notice that the lights on the street are out. In fact, lights everywhere are out. I smell smoke. “What’s happening?”
“Not now, Finn,” he says, his words clipped. He slips past the front of the car, keys jangling in his hand. “Hurry!”
A block away, someone is running down the sidewalk in our direction, a woman. I can’t tell who it is, but she’s really in a hurry. And something in the way she moves strikes me as odd.
“Get in the car!” Dad hisses.
“But maybe she knows—”
“Get in the goddamn car, Finn! Now!”
I glance back at the woman, and suddenly I’m terrified. She’s moving way too fast, and I don’t like the way her legs scissor. It’s not natural.
“Dad, what’s going on?”
The door opens and slams into me, jolting me away from the car before he grabs my shirt and yanks me inside. My head hits the edge of the roof. I see stars. Read the rest…

Hey all here is but a small sample to whet your whistle! Please remember this has not been edited in any shape way or form and is really in its roughest drafts at the moment so place forgive any issues. Other than that I hope you enjoy it. Would have loved to add a bit more but we started getting in to spoiler territory. Obviously if you haven’t read up through ZF8 this might not want to be where you start!

Prologue –
The ride back from North Carolina was as emotionally high as I can remember being since the zombies had come. What I felt going forward would always be tempered with the losses we’d suffered along the way. So the baseline would be a lot lower to start with, it was an evil born from the devastation. Still though to feel elation, love, accomplishment, just the mere fact of being alive, healthy and among friends and family was nearly beyond words. Of course it was short lived and false but we had it in our grasp if only for a moment. We did not tempt fate much on that trip, we topped all the vehicles off with gas and everything else that even remotely resembled a liquid container so we would not have to stop again. We took shifts driving and in 24 hours we had gone from reunion to pulling into my brothers long lonely stretch of dirt roadway. Read the rest…

Standing outside the tent city gates, our situation becomes all the more real. We no longer have access to the van we used to drive to Tent City. Until we get on the helicopter and get to Oklahoma, we have no place to stay. We’re homeless and on foot now. That’s it.
“All right,” Todd says. “We’ve got a long walk ahead. So let’s stick together. Keep your eyes and ears open.”
“How do we know your helicopter is even where it’s supposed to be?” says Angela. Despite our being in the zombie apocalypse, her short, dark hair looks like it’s been cut at a salon. Someone must be good with the scissors.
Todd rolls his eyes. “I told you before. My chopper is locked up. Nobody is going to get to it. Besides, you’d have to know how to fly the fucker.”
“Don’t get snippy,” says Angela. “I was just asking.”
Wayne wraps his arm around his wife. “Okay, hon. Enough! We need to get a move on.” He’s barely said a word since we met. I’m assuming Angela does most of the talking in their marriage. Read the rest…

Eve Brenner was an ordinary girl from an ordinary small town. She always dreamed of becoming something more. Her desire for excitement leads her to study archaeology in university and she lands herself a volunteer spot on a high profile dig in Egypt. Her best friends Alexandra, and Cameron (who has had a crush on Eve since High school) join her on the journey and share the same lust for adventure, but they get more than they bargained for.

Eve decides to wander off on her own and inspect some restricted areas at the dig site. Her eagerness for fame and praise from her favourite professor Dr. Whalther Hugo Augustus, lead her deep into a dark tomb. Eve soon realizes that she is not alone down there. Something in the shadows bites her, and changes her life forever. Read the rest…

#1
Later that evening I sat near the office and decided to strike out on my own, without anyone else knowing what my intentions were. Words could not describe the feelings twisting within my chest. I felt like somehow I was abandoning those in the building. After one last glance at the station, I strode from the area with Darren, Ryan, and the doc in tow.

We had let in an entire eater pack while the others were sleeping. They hadn’t tied me up that tightly. I knew they wanted to harm me, and it was not my time to die. My heart knew what needed to be done. It was up to me to ensure the three men’s safety after I unbolted the door and let in the hungry horde.

One almost bit Ryan, but Darren was able to stab it in the eye before his arm became chuck roast. That would not have been a pretty sight, and I would have felt so bad if the kid had become an eater. Read the rest…

BONUS! You can also order a cool T-shirt from the event.

with works by 13 Summer of Zombie authors. Available for a limited time!

Check back often as more interviews, guest posts and teasers are added!