On October 27th, the re-release of Life After the Undead will be out.  I'm super excited.  I've always been really proud of this book.  Not much was changed, but some was, and I'm much happier with the story.  While you're waiting for Tuesday, check out the new cover.  I think it turned out awesome! 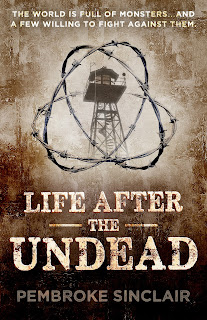 And here's what the book is about:  Seventeen-year-old Krista must quickly figure out how she's going to survive in the zombie-destroyed world. The one advantage humans have is that the zombies hate humid environments, so they're migrating west to escape its deteriorating effects. The survivors plan to construct a wall at North Platte to keep the undead out, and Krista has come to Nebraska to start a new life.

Zombies aren’t the only creatures she has to be cautious of—the other survivors have a dark side. Krista must fight not only to live but also to defend everything she holds dear—her country, her freedom, and ultimately, those she loves.

Join Krista in her quest to survive in this thrilling apocalyptic novel by Pembroke Sinclair.

In addition, I'm going to be in Denver tomorrow at Mile Hi Con to give my Surviving Zombies workshop.  There will be other amazing authors there, and I'm sure it's going to be an awesome time!
Posted by Pembroke Sinclair at 7:28 AM