Today is the Letter T for Blogging A to Z
** Check out the full list of A to Z blogs here. - ** See all this blog's A to Z posts and links here. 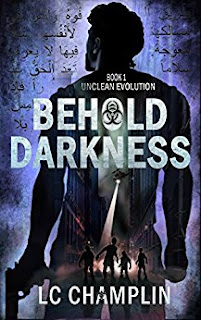 Today I welcome LC Champlin, author of  Behold Darkness (Unclean Evolution Book 1). She talks about our favorite topic, zombies, and the TV tropes that inspired her book.

Haunted yet ambitious New York businessman Nathan Serebus considers himself more rogue than hero. But that’s before a trip to San Francisco with his attorney Albin Conrad lands them in the middle of a multiple-target terrorist attack. Worse, the strikes unleash a contagion that transforms its victims into unreasoning, cannibalistic killers. As Nathan matches wits with the plot's mastermind—whose goals may be closer to Nathan’s than he’d like to believe—the manipulation and intrigue force him to make a decision: fight the darkness within, or evolve to embrace it? His choice will have grave consequences for all of civilization.

What Inspired the Book?

Villains and antagonists intrigue me. I'd rather read about them than heroes. I'd also rather write about them! In this book, I wanted to write about a "Magnificent Bastard"  - see TV Tropes  - but have him be the protagonist rather than the antagonist. So I looked at my favorite antagonists for inspiration. They didn't disappoint. Every character in the book has a bit of a villain in them.

Why the Zombie or Cannibal Outbreak?

What better way to show off all the fun of being an antagonist than during a crisis? And I was reading The Walking Dead: Rise of the Governor at the time.

Also, I wanted to write something I enjoyed. And let me tell you, I enjoyed every chapter. I hope you will too.

Favorite quote:
Nathan Serebus: “We rise up and take the power back. Never let a crisis go to waste.”

Pretty much sums up Nathan's way of looking at life.

The door’s hydraulics attempted to pull it closed, but the writhing mass blocked it. The explosion outcome was looking better and better. Albin’s PD22 beam flicked over the new development, Nathan’s light joining it as he brought the AK to bear. Teeth and eyes flashed in the lights. Not terrorists . . . Albin’s cannibals. They wore normal clothing and looked human. Except for the way they moved, twitching and writhing. And . . . black drool rolled down their chins.

Sssssaaah. Hisses blended, rose, as if from steam valves. Or a snake pit.

“Get back,” Albin ordered, taking the majority of Kate’s weight while retreating.

Nathan backed into the valet room, Albin and Kate almost on top of him in the rush to slam the door. Pushing Kate onto Nathan, the attorney braced his back against the barrier.

Nathan gaped. “What the—”

Nathan had already begun easing Kate into an office chair. Clang! Four drawers of steel hit the linoleum. A kick centered it, wedged the other end against the counter support. Only then did Albin peel from the door.

The blue fire burned in his eyes again as his chest heaved. He turned his light and .45 on the window. Nathan joined him with the P2X and AK.

Thud! Nathan and Albin recoiled from the ashen visage that threw itself at the window. Teeth clicked on the glass as the . . . cannibal, junkie, whatever tested the barrier. Black mucus clung to the window as the blistered, black tongue tasted glass.

Rust-colored eyes with pinpoint pupils bugged from sunken sockets. Flat, dead-fish orbs, they could belong to a freak-show Australian marsupial. A loris maybe, or an aye-aye. Were they even marsupials? Did they even live in—Focus!

Smartphone in hand, video. No one could accuse him of hallucinating about monsters this time. “Start the show.” Voice recognition initiated the recording. “Film.” He shoved the handheld at Albin.

Find the goddamned keys. The AK swung across Nathan’s back while he drew the H-777. It took a few whacks against his palm to get the light operational. Damn Jacuzzi.

Sickness or drugs or cultists or . . . Or maybe I’m the one on drugs. Somebody had slipped a hallucinogen in his water and in reality he now was passed out in a puddle of drool.

On the near wall, over another counter and beside a filing cabinet, glinted rows of numbered hooks with keys. But the Bentley keys wouldn’t associate with those of peasant vehicles. On a nail beside the board of hooks hung a set of keys. The tag read Back Garage. They went into a pocket just in case.

“Kate, where are the keys?”

He turned to find her almost unconscious. Damn it! “Kate.” He patted her cheek. “I know you want to sleep, but you have to stay with me.” If she dies, pragmatism began. The wolves win. That silenced it.