Introducing Bryce De Luca from the Zombie Games Series. Fortunately he was able to take some time away from  kicking zombie butt as he searches for Cassandra Wild for a short interview.

Me: So, for those who haven't heard of you yet, could you give us a little synopsis of who you are and what your role is in Zombie Games?

Bryce:  Yeah, sure. Well, before all the shit hit the fan and life was semi-normal, I was a construction worker and part-time karate instructor in Minnesota. When I wasn't busy with that, I had to help care for my little brother Bobby- who has Downs Syndrome and needs more attention than what our mother was willing to provide. Now I'm just trying to stay alive and help keep my group safe.

Me: And how has that been?

Bryce: (Pause) Well, it's been one struggle after another.

Me: Sorry, that's my fault.

Bryce: Yeah, can't you go a little easier on us?

Me: (Chuckle) Now, what fun is there in that?

Bryce: Wild? Well, she was a student at the Dojo I transferred to.

Me: Was it love at first sight?

Bryce: (Chuckle) It was more like love at first swing. No, I was a little cocky during our first meeting and she pretty much put me in my place. It was all in fun though.

Me:  You and Wild must make a pretty good team when it comes to fighting off zombies?

Bryce: Hell yeah. Unfortunately, she's always getting herself into trouble and we haven't had a lot of time to ourselves. Right now, we're traveling across the country, again, to try and locate her ass along with the rest of our group.

Me: That's right, she took off to try and find her grandparents.

Me: What are you going to say to her when you find her?

Bryce: Well, Kristen, it's probably not appropriate for this blog. I'm a little pissed off at her, as you already know.

Me: Oh, yeah. Well, with that in mind, I'd better let you go so you can continue on with your search. Good luck and stay safe, my friend!

***************
And now for an excerpt from  Zombie Games (Origins)  Cassie and Paige trying to locate their families and flee a house surrounded by zombies. 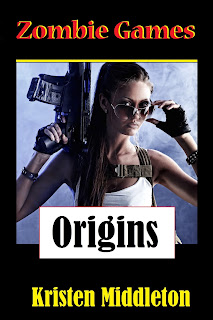 We stepped cautiously through the kitchen and over to the sliding glass door. To our dismay we found the pool area climbing with zombies. There had to be a dozen walking aimlessly around the pool, some falling into the water and sinking to the bottom. Fortunately, none of them took any notice of us.
I snorted. “This could almost be funny if it wasn’t really happening to us.”
“Holy crap,” she mumbled. “I think I’m going to puke.”
The smell of rotting skin was overwhelming. Resisting an urge to vomit myself, I slid the door closed and looked at Paige. “Wow, you didn’t invite me to your pool party. That hurts.”
Paige groaned. “All jokes aside, we’re screwed.”
“At least the sun’s starting to come out, they’re easier to see.”
She shivered. “And how’s that supposed to make it better for us?”
“Yeah, they aren’t pretty, especially the ones who’ve been dead for a while.”
Paige’s eyes lit up. “Hey, did you ever check the cabana?”
I shook my head. “No, I didn’t even think about checking that place, I just wanted to get inside the house.”
“We’d better check it out, now. How do we get past those things?” she asked.
“Well, maybe we can create some kind of distraction in the front of the yard to draw them away from the pool?”
Just then we heard the faint sounds of gunshots. The zombies must have overheard as well, because they began moving idly towards the gate. When the last of them were no longer in sight, I nudged Paige.
“Let’s go,” I said.
I slid the glass door open and we stepped outside. The cabana was on the other side of the pool and we could hear more gunshots as we made our way to the entrance. Paige pulled open the door and we crept inside. It was empty.
Paige took off her softball helmet and sat down. “I thought for sure…Oh, God…where in the hell are they?” she moaned, putting her head in her hands.
I knew her pain. All I could think of about in that moment was my little sister. A memory flashed through my mind of when she was three or four years old, how she would follow me everywhere in her beat-up pink cowgirl boots, that were usually on the wrong feet, begging me to sleep in her room. I’d eventually relent, then grumble the entire night about having to watch her princess movies and the way she’d toss and turn as she slept, kicking me in the back. But right now, I would do anything to go back to that time.
I released a breath and squeezed her shoulder. “Let’s go and find out where that gunfire was coming from.”
Paige nodded, brushing away the tears from her face.
We opened the cabana door and stared in horror; the zombies were back and they brought dates. We were trapped and surrounded.
“Okay, now what?” she whispered.
Just as I opened my mouth, I saw a figure stepping through the sliding glass door. My heart leaped with joy when I recognized the loveable scowling face. Bryce! He’d actually come for me!
“It’s Bryce!” I shouted.
The shuffling and groaning of the zombies ceased; you couldn’t hear a bone drop. Everyone, including the zombies, turned towards us.
“Nice going,” said Paige dryly.
Bryce lifted his automatic rifle. “Get down!” he demanded.
Paige and I crouched down as he began shooting at the zombies. I pulled out my gun and aimed at the ones nearest to us. Blood, mucous, and body parts were flying everywhere as we watched all of the carnage in a twisted kind of glory. The dead got deader and we lived another hour in this hideous nightmare.
Paige shuddered. “Okay, this is totally disgusting.”
“I can’t believe he’s actually here,” I said, reloading the Beretta. The butterflies were going crazy in my stomach again. I didn’t even care that I broke a third nail. I flicked it aside and decided the rest would come off immediately when I got home.
“Only you would fall in love during a zombie massacre,” said Paige.
I shook my head. “I’m not in love with him. I hardly even know him.”
“Face it! You’ve definitely got a thing for him.”
I took off the softball helmet. “He’s cute, sure, but he’s also a little annoying.”
She shrugged. “He’s a guy.”
When the last of the zombies lay twisted and broken on the ground, Bryce jogged over to us. He was still wearing what he’d had on the last time I’d seen him, but it was now covered with blood and gore. Part of me wanted Bryce to sweep me up into his arms and carry me to safety, while another part wanted him to burn the disgusting shirt first.
“Are you girls okay?” he asked in his deep voice. I’d almost forgotten how amazingly blue his eyes were.
“We’re fine. Still haven’t found Allie or Paige’s mom and sister, though,” I answered.
Bryce looked up at our helmets with the hint of a smile. “Nice touch.”
Paige’s eyes grew wide and she nodded. “It was my idea, so they can’t get to our brains.”
He bit the side of his lip to keep from cracking up then looked at the house. “So, you’ve checked everywhere, the entire house; basement; garage?”
Paige and I looked at each other.
“Garage,” we said in unison. Neither of has had even considered the garage.
“Missed the garage? Okay, stay behind me and do exactly what I tell you.”
Bryce started walking towards the side door to the garage, which was next to the cabana.
Paige checked out his rear and gave me a “thumbs-up” approval.
Posted by Kristen Middleton / K.L. Middleton at 12:30 AM