A to Z Blog Challenge - 'N' is for Necromancer

I don't know about you, but the very term "necromancer" makes the hair stand up on the back of my neck, especially since it usually deals with dabbling in black magic while trying to raise a spirit from the dead. If you look online, there are many sites devoted to this type of thing, but as for me, I prefer to write about it in a fictional sense, letting the spirits and the dead stay where they are- out of my suburban home in Minnesota. 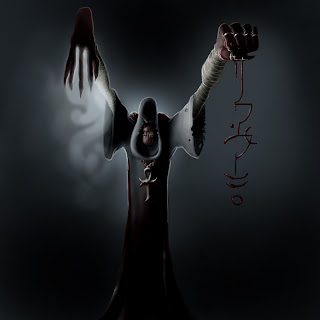 What is a Necromancer?


In the world of science fiction, it is someone who conjures up spirits of the dead for purposes of magically revealing what the future holds or changing the course of events. They are the masters of the art of death, they're the epitome of an Evil Sorcerer.

The word 'necromancy' comes from the words 'nekros' (dead) and 'manteia' (prophecy), meaning that necromancers are more likely to summon spirits for divination than armies of rotting zombies.


A little history about Necromancy -
Early necromancy was related to, and most likely evolved from- shamanism, which calls upon spirits such as the ghosts of ancestors. Classical necromancers addressed the dead in "a mixture of high-pitch squeaking and low droning", comparable to the trans-like mutterings of shamans.

In the present day, necromancy is more generally to describe the pretense of manipulation of death and the dead, often facilitated through the use of ritual magic or some other kind of occult ceremony.

The oldest literary account of necromancy is found in Homer's Odyssey, under the direction of Circe, a powerful sorceress. Odysseus travels to the underworld to gain insight about his impending voyage home by raising the dead spirits through the use of spells that Circe taught him. I myself have never read any of Homer's poetry, but now that I've done a little research, I find him quite intriguing.

Want to read more about Necromancers, check out this popular series-


The Alchemyst (The Secrets of the Immortal Nicholas Flamel) by Michael Scott.