A to Z Blog Challenge: P is for... My Pet Zombie, a kid's zombie book

*** This month we are participating in the A to Z Blog Challenge. Check it out! ***

Today is the letter P for My Pet Zombie, a kid's zombie book 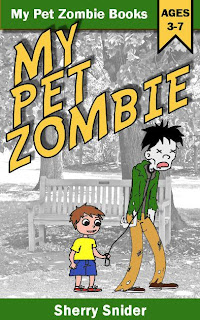 Kids have turtles, fish, cats, and dogs for pets, but what every kids wants is a pet that's different than everyone else's, right?

Ask author Sherry Snider, "what’s the best pet ever?" and she has the answer: …a zombie, of course.

Zombies are so popular now that even little kids want to read about them, it seems. But...ugh.... nightmares, gore... not kid stuff?

Snider admits that was the challenge: how to introduce young children to the concept of zombies without scaring them to death.

"Our favorite TV shows, movies and books were out of the question," she says. "Even some of the existing children’s books about zombies started off cute, but got a little hairy with exposed bones and hanging eyeballs.  Using a zombie’s severed arm as a club is hysterically gross for older kids, but it tends to upset the little ones."

And why, you may ask, bother at all? I mean zombies aren't exactly nursery rhymes (though the unsanitized versions of those can have enough problems in themselves). But kids know more than you think. They hear things, and they ask. 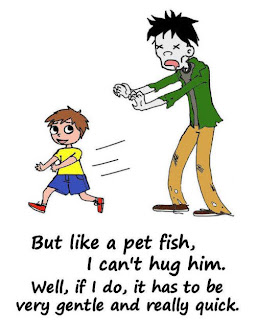 For the little ones who were old enough to start asking about zombies but not quite old enough for the gore, Sherry wrote My Pet Zombie

“Pets are a concept even small children can grasp, so I introduced the most basic zombie characteristics from the perspective of a child and his pet,” she says.

The result is a cute, kid-friendly book where zombies are a pet instead of threat. We'll leave the philosophical and psychological questions for another post.


Sherry says she was purposely vague about certain zombie questions…leaving the deeper topics to the parents.

“Questions about life and death, where zombies come from, the differences between fiction and nonfiction, and whether or not a child can have his own pet zombie are best left to mom and dad," she says.

"My objective was to create a cute story specifically to introduce young kids to zombies without giving them nightmares.” 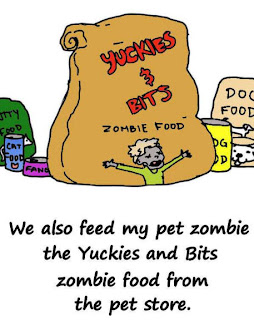 According to Sherry, "without coming out and making statements in the story," kids grasp pretty quickly that zombies are:

** For a limited time, Sherry’s offering a  special bonus: the ebook version of My Pet Zombie

on Amazon.com  includes a link to download a free copy of the printable PDF companion book, My Pet Zombie Coloring Book.