A to Z Blog Challenge - O is for GIRL Z: My Life as a Teenage Zombie and Other Zombie Books....

*** This month we are participating in the A to Z Blog Challenge. Check it out! ***

Today is the Letter O for Other Zombie Books

As an author, most times you try not to read in the genre you are writing in so as not to be influenced by someone else's words.  I pretty much did that for the two years up to GIRL Z: My Life as a Teenage Zombie being written, accepted, edited and now coming out in August.  (See link for details and prologue, and where to read chapter one.)

But... it's hard to stay away for long. While I am working on other stories, a novella and hopefully a sequel to GIRL Z: My Life as a Teenage Zombie,  the ideas I've come up with are adequately different enough from what's being done that I'm not worried about being influenced. The interesting thing is in what I've read so far, the premises are vastly different from each other and from what I am writing - as it should be.

Yes, there are plenty of "main characters fight zombies and try to survive" books and stories, but to make it unique, each should have its own background and premise. 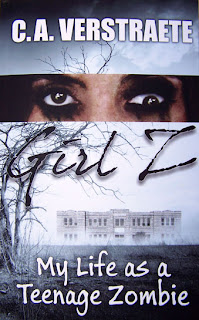 For instance, in GIRL Z: My Life as a Teenage Zombie, the main character Becca is 16, trying to protect her cousin and find their missing mothers while coping with her own weird body changes, quirks and appetite as a part-zombie.  So there's humor, a little romance, and yes, of course, zombie fights.

Now I have to admit that I haven't read as many zombie books as others, since the field is never ending. I come across new books every day and more keep coming (like a zombie horde. ha!)

So here are a few examples of books with unique premises that I enjoyed:

, Gena Showalter  - Alice disappears down the rabbit hole, discovering a world filled with "spirit" zombies. I have to admit the book was good, but because of the title, I guess I was expecting more of a connection to the original Alice in Wonderland.

, Angela Scott - A Zombie Western. You don't get much more different than that! And she also has a unique twist on becoming a zombie.

just came out, I'm now reading the first book since I'm behind. Besides a good story, I especially like the little vignettes she puts at the end of each chapter.

*  Though I've read Jonathan Maberry's Rot & Ruin (Benny Imura)  YA series so far (book 4 is coming out) about Benny Imura fighting zombies, for me, the series got kind of long-winded and a little weird by book three with death cults and lots of fighting. For me, the first and second books were the most touching.

* My introduction to Jonathan Maberry was with his  Dead of Night: A Zombie Novel

, which for me is a read-again book, full of great imagery and writing. The premise caught me: a doctor experimenting on a serial killer with a drug supposed to keep him conscious while his body rots. Instead, before he's buried, the killer wakes as a zombie, infected...and hungry.