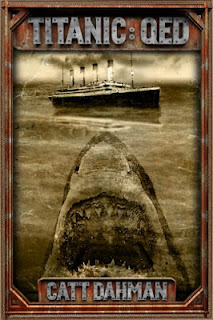 Today, prolific author Catt Dahman talks about her latest take on zombies - and the Titanic! (Love that cover!)

In 1912, the Titanic hit an iceberg and over the course of a few hours, plunged to the bottom of the sea, leaving a fraction of the passengers and crew to bob about the frigid sea in small lifeboats. The others, husbands, fathers, third class passengers froze to death in the icy water, but they were the lucky ones; there was much worse in the sea that fateful night.

Behemoths, leviathans, a hundred-foot megaladon and other flesh-devouring creatures broke the boundaries that night, crossing over into our world to prey. As the Old Ones slumbered, the beasts of Lovecraftian lore broke free to terrorize and consume the innocent.

Written as H.P. Lovecraft would tell the tale, Titanic QED

explores the untold story of the night the Titanic sank.

Here's Catt!
I have been labeled a “zombie writer” and I am one. I have a nine-book Z is for Zombie series being released by Severed Press right now and they are going to pick up the others that go with the series including he first book, X is for Xombie.

But I am also a horror writer, first and foremost. I have several very scary books available that are about a family of cannibals, Helen of Troy as  vampire,  a curse and serial killer, and about..well…crazed, violent people/rain/ the end of the world. In addition, Severed Press has me on another four-book contract for stories about “bad fish.”

Titanic: QED was just released and is about the sinking of the Titanic during a time when Lovecraftian creatures and a megaladon make the catastrophe much worse. A giant, hungry shark going after the people in the water is the very least of the terror. I had fun combining classic Lovecraft with a shark and Titanic because they don’t go together, and yet, they mesh seamlessly. (Check out the assorted Titanic pix on her page.)

I have been writing these for 30 years, but have been actively in the business for only a year. For some reason, I was grabbed very quickly by a publishing house and have done well enough to write full time. My degree is in psychology and education and I taught literature at a college for a while, but stopped teaching to write full time.

Zombies, in true Romero and Walking Dead rules, are a vehicle of storytelling. I don’t list a ton about prepping or weapons or such, but I tell a very intense story with my series about loyalty, the right to decide one’s own terms for life and death, maternal love, morals, and how shades of gray matter as much as the typical good vs. evil ideals.

My series begins with old  retired men and how that, even in the worst circumstances, have wonderful stories and experiences that matter again in an apocalypse. My characters have feet of clay as they are sometimes scared, selfish, or depressed. I have heroes and I have cruel bigoted characters, men and women, strong, weak, old and young, black, white, brown, gay straight…everyone gets a voice when I write.

I can’t say my series has a happy ending, but it also isn’t a typical zombie-story either. It is as real and fair as possible and sadly, that isn’t always happy. I am kind of becoming known for endings that are a little brutal and realistic, but when dealing with the intricacies of the human mind, we find some scary endings.

I became interested this past year in getting my writing out because I feel some fans want my raw, honest style. I kept reading glittery, happy stories and sure, they make us feel good, but it’s like too much ice cream. I felt there should also be some hard core food topped with salsa hot enough to strip paint off a barn. That was my goal: to seriously break a few rules and push boundaries and make the reader as uncomfortable as possible. I have a need to get into a reader’s comfort zone and blow it wide open with terrifying images and disquieting words. If a reader feels as if I have crawled into his mind and dug around, leaving him to worry and ponder the ideals I set in print, then my day is done. There was a need to write about people, using zombies as the least terrifying issue as they rip and tear through the human population.

My publisher, Severed Press, is great. My editor suggests themes that he knows I will fly with in very new ways and that’s why we work well together. I can say this: there is no one writing as I write that pulls no punches. Richard Laymon, Edward Lee, Ira Levin, and Thomas Tryon who all make the reader feel comfortable and cozy and then push them off a cliff of the story have influenced me. They can take the ordinary and make it very frightening.  I am just fortunate to have Gary Lucas at Severed Press, a great copy editor, and supportive family, fans, and friends pushing me to scare people.

I am from Texas and most of my stories happen in and around my state because only here do we find characters this rich, funny, and amazing.
Posted by CA Verstraete at 12:00 AM