Good news for zombie book, GIRL Z: My Life as a Teenage Zombie 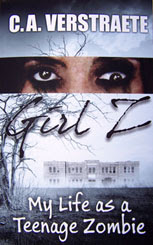 Some good news and reviews for GIRL Z: My Life as a Teenage Zombie (coming in August!)

"GIRL Z: My Life as a Teenage Zombie brings teenaged angst to an entirely new level when 16-year-old Becca is infected with a zombie virus and becomes one of the living dead. ...

"Still sentient and able to control the whole flesh-eating cravings, Becca struggles to find her place in a world where some of the dead eat the living while others try to fit into their old lives, only to be met by hostility and fear from former friends and family.

"Written from Becca's point of view, we get a narrow and very realistic view of this chaotic new world from a self-absorbed teenager's tunnel vision. A very fun and readable introduction to a new series!"
--Dana Fredsti, author of Plague Town & Plague Nation, swordfighter, and actress in Army of Darkness.

And a portion of a great review coming up in Kings River Life Magazine:

“...You can actually look at this story as a parable about the teenage condition. An orderly life is upended by forces and urges that are difficult to control. People you trust can turn on you, and sometimes you feel like you’re going to die. Yep, that’s being a teenager.


“...Verstraete, whose background runs from journalism to designing one-twelfth scale dollhouse rooms, has come up with a clever way of telling her story from a zombie point of view without sinking to the “Hungry…eat…BRAIINNSSS!” level.... With Girl Z, Verstraete has shuffled to the head of the zombie-lit horde...” – Terrance Mc Arthur, Kings River Life Magazine, www.kingsriverlife.com