Long before the recent zombie craze there was Stephen King.

had you jumping at every little sound; CELL

made technology evil. Now he makes the amusement park even creepier with the release Tuesday of JOYLAND, his 44th! novel. 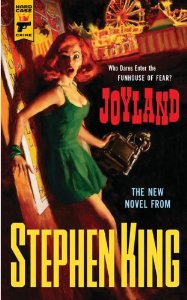 Set in a small-town North Carolina amusement park in 1973, JOYLAND

focuses on college student Devin Jones' summer work as a carny where he confronts the legacy of a vicious murder, the fate of a dying child, and the ways both will change his life forever.

The book released in paperback only Tuesday from Hard Case Crime.

In his appearance on NBC's Today show Monday, King said one thing that writers will appreciate about the plotting process. The amusement park setting was something he considered much earlier.

He almost didn't go with his idea of using the Overlook Hotel in The Shining as the setting in the book, but changed his mind:   "...Originally in The Shining I thought (they) could be caretakers of an amusement park... I thought that could be kind of hard to trap people."

And speaking of The Overlook... zombie fans will be interested in the upcoming sequel to The Shining - DOCTOR SLEEP

About Doctor Sleep:
On highways across America, a tribe of people called The True Knot travel in search of sustenance. They look harmless—mostly old, lots of polyester, and married to their RVs. But as Dan Torrance knows, and spunky twelve-year-old Abra Stone learns, The True Knot are quasi-immortal, living off the “steam” that children with the “shining” produce when they are slowly tortured to death.

Haunted by the inhabitants of the Overlook Hotel where he spent one horrific childhood year, Dan has been drifting for decades, desperate to shed his father’s legacy of despair, alcoholism, and violence. Finally, he settles in a New Hampshire town, an AA community that sustains him, and a job  at a nursing home where his remnant “shining” power provides the crucial final comfort to the dying. Aided by a prescient cat, he becomes “Doctor Sleep.”

Then Dan meets the evanescent Abra Stone, and it is her spectacular gift, the brightest shining ever seen, that reignites Dan’s own demons and summons him to a battle for Abra’s soul and survival.