How Do Zombies "Survive"? 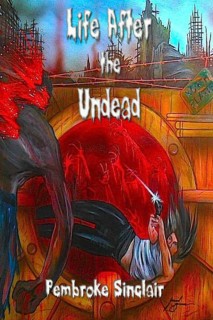 When I travel (which, remember, isn't often), not only do I look for ways to escape town, I also take in the climate.  We have such a varying climates in the U.S., from tornadoes to wild fires to blizzards to extreme heat, how do we survive?  Probably because we bend the environment to our will.  We create heaters and air conditioners and safe places to go.  But what about zombies?  They don't have the brain capacity to create new things.

On the plus side, zombies no longer have the ability to feel.  They don't notice the extreme heat and cold.  As the walking dead, they no longer worry about anything, except maybe finding and eating humans, but I doubt the thoughts consume their entire day.  It depends on what you're reading.  Anyway, the weather still has to affect them in some way.

In  Life After the Undead, I explore that same question and claim that the zombies can't live in the East because the humidity causes them to deteriorate faster than normal.  They move to the West where the dry air preserves them.

At the moment, I'm in the Southwest visiting family, and I'm wondering if zombies would be able to survive here.  It's dry, there's no denying that, but it's also incredibly hot.  The sun pounds the earth with harsh rays, and it makes me wonder what it would do to a corpse.  As humans, we can counteract the effects by drinking water and finding shade, but zombies don't have that capacity.  What would happen to them?  Would they turn into a walking piece of leather?  Would they become so brittle every step would cause them to fall apart?

I'm going to have to contemplate this a little more and do some research.  To me, this kind of stuff is fascinating and could mean the difference between life and death.
Posted by Pembroke Sinclair at 12:00 AM