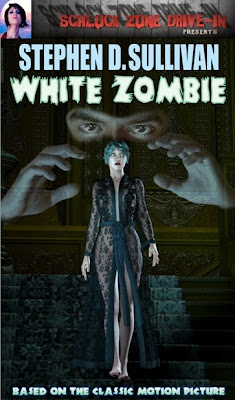 Classic monster and horror movie fans will be thrilled to discover something different - a new novelization of the classic 1932 Bela Lugosi film, White Zombie! by award-winning author Stephen D. Sullivan

In WHITE ZOMBIE, Madeline Short travels to Haiti to marry her fiance and is soon caught in a web of superstition, lust, and fear.

Will she find wedded bliss, or fall victim to the witch doctor known as Murder Legendre and become a White Zombie?

What interested you in the movie?
Fist, Bela Lugosi -- who’s one of the all-time great horror stars -- but also the fact that it’s a really interesting movie.  It’s lean and mean, made on a miniscule budget (Bela reportedly was paid only $900 -- about $15k in today’s movie money), but it achieves a lot in terms of creepy mood and atmosphere.

It also has a really interesting sexual subtext, which I’ve brought out just a bit more in my adaptation.

Folks who haven’t seen the movie should check it out.  It can be seen free online -- on YouTube or Archive.org -- or you can buy a recently restored blu ray or about a half million DVD copies.  I’ve thought about putting together a DVD of it myself, with commentary and/or introductions by me.

What made you decide to work on this project?
I was looking for a project that my Monster Kid fans would like, something that might bring new readers to the rest of my work.  White Zombie is well-known and well-loved, and the fact that the movie is in the public domain allowed me to create a novelization of it.

I also thought it would tie in nicely with my upcoming Frost Harrow series of horror novels.  The book contains a sneak preview of that series.

What is the most surprising - and hardest - thing about the project?
There were a few “hardest” things.  First was transcribing some of the original lines, ‘cause Bela and the guy playing Dr. Bruner have pretty thick accents at times.  The introduction of the six main zombies was a nightmare, getting their names and what was being said about them right -- or at least close to right.

The second hard thing was taking a quick-cutting movie and turning that into a one-character-per-chapter point of view (POV) narrative -- and making that exciting and coherent.

The third hard thing was a scene where I used a zombie’s POV for a chapter.  A lot of reader feedback and rewrites on that one, but I’m pretty proud of it now.

The most surprising thing was how long this took to complete.  It’s a fairly short movie, and not a very long book, but I spent a lot of time working really hard to get it right.  I hoped to have the book out by October, 2013 -- and instead it came out a few days before Halloween.

Very glad to have it out now so people can read it.  (And a print version should be out before Christmas, too.)

Share your favorite line:
“There is no other way.”  Murder Legendre (Bela Lugosi’s character) says that when he’s trying to convince one of the characters to do something really bad.  That’s straight from the movie, and I tried to keep nearly all of what you hear on the film in the adaptation.  Plus, I had to make the new dialog I added sound like the original script.  If you can’t tell the difference, I’ve succeeded.

(If you want to know which is which, you can check the recreated script, which is included with the Special Edition of the book.)

How about some "fun facts" on the project?
White Zombie was the first feature-length zombie film and contains the first utterance of the word “zombie” on screen.

Ironically, the actor who utters the history-making word -- Clarence Muse, playing the Coach Driver -- doesn’t get an on-screen credit in the movie.  I’m guessing that’s because it was a small role, but probably being African American in 1932 didn’t help, either.  He’s been restored to the credits in my recreation of the script, which is included with the Special Edition of the book.
** Stephen D. Sullivan is the author of numerous books and stories, including the online giant monster serial,  Daikaiju Attack--www.daikaijuattack.com.