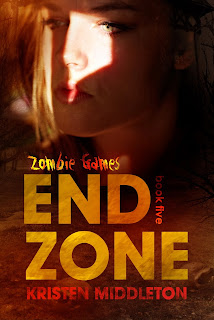 The last book in the Zombie Games series, End Zone, is on sale now for only $.99. The price will go up on December 1st, so if you are looking to read the final installment, get it before it goes up to $2.99.

The rain died down, but I was still chilled to the bone. I figured that if I wasn’t killed by the people in the truck, I’d probably die of pneumonia if I didn’t get out of my wet clothes soon and into something dry soon. I decided that the first thing I’d do if I escaped, was to break into a vehicle and search for clothing or a blanket. For now, however, I had to bear the cold and as usual, hope that I’d survive whatever lay ahead of me. It was obvious that I’d made another dumb decision without thinking it through, and now I’d be paying for it somehow.
At least my friends were safe.
But Bryce, he had to be just furious with me again. If I didn’t watch myself, he’d change his mind on marrying me. That thought made my heart ache. I wasn’t sure if I could handle it if he dumped me. I wouldn’t necessarily blame him if he did, but I’d rather die than lose him; which was why I had to survive, get back to him, and prove that I could stay out of trouble. Or at least try a little harder.
I stared down at my ring and felt tears burning in the back of my eyes. I didn’t want to die, not without getting married to the big lug. Heck, we still needed time to get to know each other. I knew which foot he preferred to kick with and that he had a helluva right hook, but I had no idea what his favorite color was, how he liked his eggs, or what his favorite food even was.
My God, did he even like pickles?
I closed my eyes and tried to picture his face. Thankfully, it came easily and not surprisingly, he was scowling at me.
I smiled.
Damn, I loved his scowl. I loved everything about my karate man. But then my thoughts drifted from him to my sister and my smile fell.
Allie, she must be terrified.
I hoped that Billie snapped out of whatever was happening to him and brought her back to my grandparent’s house. That’s what I hoped, but something inside told me that wasn’t going to happen. That something much more sinister was going on. Something also told me that I was going to be there when it went down. I hoped that I was wrong. I prayed that she and Kylie were safe and would stay that way.
When the pickup veered off of the highway near MOA’s exited, I couldn’t believe it. Here I’d been kidnapped, but taken to the one place I really wanted to be. If I hadn’t felt so much hate for the bastard driving the truck, I’d have offered him gas money.

Posted by Kristen Middleton / K.L. Middleton at 1:00 AM