Zombies, like other movie monsters, have changed over time to reflect society’s fears and to become more scary.  It’s fascinating to see their transformation.

In the beginning, they were created by a crazy witch doctor who needed to get rid of some enemies or just possess someone who didn’t belong to him.  Then, George Romero brought us walking corpses that completely changed how we viewed zombies. 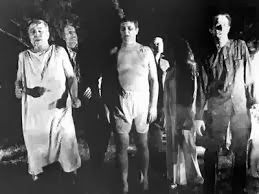 The shamblers dominated the zombie moviescape for years.  When 28 Days Later came out, it changed zombies from slow-moving flesh eaters into fast hunters, which terrified audiences.  It also opened up a debate about what really made a zombie.  Sides were taken, arguments were made, but no resolution was found.  Some believe that zombies can’t be fast, so claim that these creatures couldn’t be considered zombies. 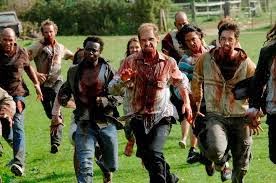 Warm Bodies further changed how zombies were portrayed by making them conscious of what they are.  They may not know that they are zombies, but they know that they are different from the humans and the Bonies and desire to change.  And they do.  They figure out how to become human again. 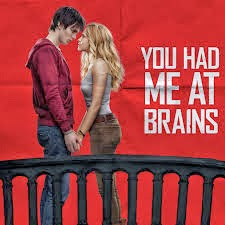 What’s next for zombies?  Can they evolve into anything else?  What zombie is your favorite zombie?
Posted by Pembroke Sinclair at 12:00 AM