A to Z Blog Challenge - C is for Corpse

Because without a walking corpse, you can't have a zombie.  Here's an excerpt from my book, Undead Obsessed, on the subject. 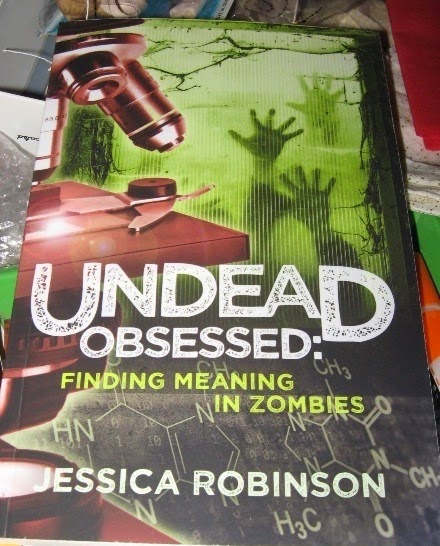 WHAT IS A ZOMBIE? The simplest answer to that question is that a zombie is a corpse that has been reanimated. It isn’t completely alive, and yet it’s not dead. It is categorized as undead. For zombie purists, a zombie has to be slow-moving and incapable of thought. It moves and hunts, but it has no purpose, no cognition. It eats human flesh, but for unknown reasons. After all, a zombie’s digestive system no longer functions, so it doesn’t need the meat for fuel or survival. The zombies created by George Romero in the film Night of the Living Dead are, for those zombie purists, the epitome of what a zombie should be. But if you look at the simple definition—a corpse that has been reanimated—zombies can encompass more than the iconic figures from Romero’s films.

Zombies have existed in society for a long time. Throughout history and within different cultures, zombies have taken various forms, all with one thing in common: they are the living dead. Europe had the revenant, nachzehrer, and the draugr. Asia had the vetala, jiangshi, gashadokuro, and ro-langs. Each of these versions of zombies struck fear into society. But they aren’t necessarily recognizable as the zombies we know today.

As modern zombies have lost their ability to reason and recall memories, a stereotype exists that they don’t recognize what is going on in the world around them—that they mindlessly wander around moaning “Braaaaaaaains”—but it may not exactly be true. They recognize enough to know when prey is near and that they need to hunt. They are also aware enough of their surroundings to navigate barriers—breaking through windows or climbing stairs—to get to their victims. Night of the Living Dead and Dawn of the Dead (1978) created the stereotype that zombies are mindless corpses driven by the hunger for flesh. In Night of the Living Dead, a young girl attacks and consumes her parents because she has no recognition of who they are. A brother goes after his sister since he has no memory of her. In Dawn of the Dead, the zombies mill around absently until prey is near, then they attack in droves. That notion has stuck in audiences’ minds as the typical and expected way for the undead to act. However, even Romero’s zombies eventually break out of the stereotype and evolve from simple creatures into beings with memories and thoughts.

Zombies are not simple creatures. For rotting corpses, there are many layers that define them. These layers contribute to the theme throughout history and from different cultures that zombies serve as a metaphor for the fears we as humans have. One of the most obvious of those fears is the fear of death. Every human knows that they will eventually die; it’s a part of life. What we don’t know is what happens after we die. Is there a heaven? Are we reincarnated into another living creature? Do we just cease to exist? These can be frightening things to think about. Most of us want to believe that there is something after death, something wonderful and awe inspiring. We don’t want to think that we turn into nothingness or horrific creatures.
Posted by Pembroke Sinclair at 12:00 AM