A to Z Blog Challenge, L for Lighthearted #Horror 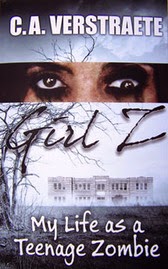 Laughing in the Gore
By Christine Verstraete

Ah, but that's where I beg to differ. Zombies and horror can be great settings for humor. Like fellow author Jaime Johnesee shared for the H post, I'm also one of those people who tries to find something funny in dark moments.  It's a coping mechanism. It's a way to lighten tensions. It's being human.

Many feel the same way, judging from the jokes that often come after a tragedy or other event. Yes, many are in bad taste; some are funny, but it's a way of coping with the unimaginable.

In writing, I like to do the same. My short stories (like the the A and B stories shared this month) often have a weird twist that can be looked at in a funny way.  Besides, truth be told, writing can sometimes be depressing. It's the rejection part that can weigh you down, so why not have fun with what you're doing?

I had fun writing my first zombie book, Girl Z: My Life As A Teenage Zombie

. I mean, if you're 16 and turn part-zombie, life can't get any worse, right? So somehow you have to find things to laugh about, simply to cope.

Plus, it's fun to think up odd jokes and weird pairings. That's why I had my part-zombie girl eating a certain raw food. She's part-human, so no brains or cannibalism for her, though her diet choice can be kind of disgusting at times.

I might not write "laugh out loud" funny, but I like to write things that make you smile, or maybe even groan. After all, writing should be fun for me, too. If I'm not enjoying it, why do it? Then the reader won't enjoy it either! Humor being subjective, of course!

** Here are a couple "funny" excerpts from Girl Z: My Life As A Teenage Zombie


Sure I had the wandering eye problem and tripped over my own feet, but so far, most of my problems were somewhat tolerable, considering everything. Not so for most male Zs, I saw. Carm and I exchanged horrified glances as we watched the rude, obnoxious way several of them acted, hoping it was a rare occurrence. Hardly.

The virus amplified the endless eating cycle teenage boys usually had. Even with all the protein drinks, I watched several stagger down the hall slobbering over packages of raw meat when they weren't slobbering over girls. Ugh. I wanted to laugh, and would've, if it wasn't so revolting.
---------

After our laughter, the room quieted as we got acquainted, or in Carm’s case, reacquainted.    She soon was whispering with Jesse, leaving me to cope with Gabe.
He gave me a conspiratorial glance. “Want to hear one of my jokes?”
My disinterest didn’t stop him.
“Okay, here’s one for you—what do you call a girl on a date who doesn’t want to eat?” he asked, a smirk on his face.
I shrugged.
“A zombie.” He laughed. “C’mon, don’t tell me you don’t think that’s funny? Hey, I’m just trying to lighten things up. I’ve got plenty more, want to hear?”
“Cute, but I don’t think being like this,” I pointed to myself, “is funny. Not at all.”
He motioned at me and leaned in to whisper. His minty breath hit the side of my face. “It is what it is, you know? We have to make the best of it. I wouldn’t worry about it, there’s nothing that’ll make you look bad. Nothin’ at all.” He winked. “Hey, anything you need, I’ll be glad to help. Any way I can.”

The Z infection, however, has mutated, affecting younger persons like her, or those treated early enough, differently. Now she must cope with weird physical changes and habits no girl wants to be noticed for.

But time is running out... Most of all, she needs to find something, anything, to stop this deadly transformation before it is forever too late...

Email ThisBlogThis!Share to TwitterShare to FacebookShare to Pinterest
Labels: a to z, blogging