A to Z Blogging Challenge- #Zombies, monsters & P for Pyramid

For a change of pace, how about a book featuring an Olympics-style tournament in which
different beings, including zombies and some zombiesh creatures, fight in the Tournament of Death 3: The Osiran Pyramid (Volume 3) 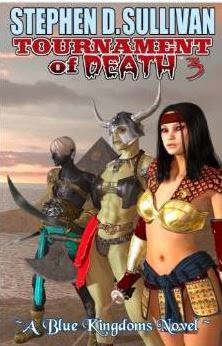 and Tournament of Death 2 - The Deluvian Temple

,  is being joined by the latest, Tournament of Death 3: The Osiran Pyramid (Volume 3)

About the book:
Again, the Wizard-Prince Amontet has summoned the best and bravest from across the World-Sea to compete in his fiendish challenge. Contestants include undersea warriors, ditzy sorceresses, wacky dwarves, scheming cat-people, doomed jenrats, grim drow, lethal samurai girls, and victims galore. Those who finish the final quest will gain rewards beyond measure … But first they must survive the perils of the Osiran Pyramid and the latest Tournament of Death...

This one features those afore-mentioned zombies, which Sullivan seems to be developing an affinity for! (Check out his White Zombie - Special Edition, an adaptation and original script of the classic Lugosi film, and and his Frost Harrow flash fiction, Lunchroom Zombies! And.... yes, ha!,  there is a Zombie Shark

Oh..., and it appears I'm quite quotable. haaa! My blurb on Tournament 3 is on the back! (How cool is that!) and I quote:

“Sullivan has a way with words, and a way of drawing you into worlds that are totally unlike any you've ever read about. Rollicking adventures sure to please the fantasy reader.” – Christine Verstraete, author of Girl-Z: My Life as a Teenage Zombie.