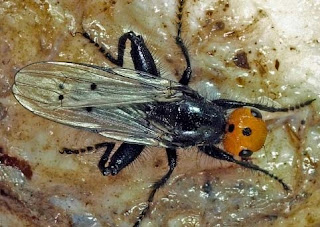 Something new/old for those writing zombie books and stories to think on...

Shouldn't something be moving inside those decaying zombie bodies?

It seems an insect called the Bone Skipper Fly is not extinct as thought, but was spotted again in recent years.

The "zombie" fly gets its name since it "jumps" and skips from bone to bone as it feeds on the marrow. And it prefers large animals and bodies.

Supposedly the fly colonizes a carcass only months after death.

Now imagine those zombies lumbering along, their decaying skin moving, shimmying, jumping with the flies beneath its surface....

Got that image in your mind? Heh-heh-heh.