(A reminder: Today begins the Coffin Hop Blog Tour.
Comment through Oct. 31 to win a copy of the new DEATH BY DRIVE-IN Anthology & buy a copy to benefit literacy! ) New posts here daily to 10/31!
COFFIN HOP runs October 24-31 at WWW.COFFINHOP.COM with more than 75 artists and authors, partying it up, bringing the treats and the tricks to an online audience of thousands. 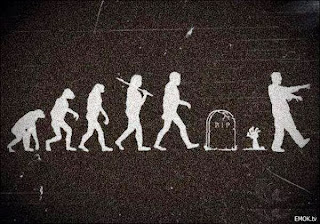 Most zombie movies and books nowadays assume the zombie outbreak will happen so fast, we won't really have time to adapt and will thus be relegated to a defensive role of the double-tap and decap. (As if Joe Public could decapitate someone with one fell swoop of the sword.)  However, never in the history of Man have we had a contagion that moved that moved so suddenly. Even the Black Death, which was spread by fleas, didn't spread as quickly or thoroughly as did Zombieism in World War Z  (World War Flea, anyone?)  In fact, Cracked Magazine recently posted an article on the scientific reasons why a zombie apocalypse would fail--and quickly, too.  (I've loved Cracked since I was a kid, and now find they are both funny and the bastion of common sense.)

So what would happen if zombieism did follow a more realistic disease vector, even taking into account the propensity of the sick to die, rise quickly, and go out for a bite or twelve?  I approached Neeta Lyffe, Zombie Exterminator with this assumption.  Health organizations and governments across the world galvanized into action, not just with police and military skilled at shooting for hte head, but also procedures for identifying and avoiding zombies, reporting them, protecting yourself against them, etc.  I think, though, the singlemost effective procedure put in place was mandatory spinal severing upon death of anyone.  Essentially, decapitation, but subtle enough that Aunt Eadie doesn't faint at the sight of Uncle Gordon's head sitting half an inch off his body.

If you were in charge during the zombie outbreak and could take preventative measures, what would you do?
Posted by Karina Fabian at 12:00 AM