It's MONSTER WEEK! here at the blog.
Today we begin a series of Halloween Posts celebrating our favorite movie monsters. Enjoy... and BEWARE! Heh-heh-heh.... Welcome to one of my friends, favorite author and monster fan Stephen D. Sullivan who's agreed to share his memories (and tell us of his enviable recent outing!) related to his favorite monster, THE CREATURE FROM THE BLACK LAGOON!


THE CREATURE THAT CHANGED MY LIFE


I learned to swim from a monster movie.  Seriously.

Sure, growing up with a house on a pond and a grandmother’s house on Cape Cod, my learning to swim was probably inevitable, but it was the Creature from the Black Lagoon that spurred me on.

Creature from the Black Lagoon is a 1954 fright flick, and it features what most experts consider the last of the great monsters to come out of the Universal Studios horror factory. 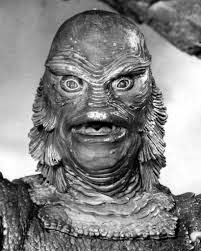 The film, part of the original wave of 3D movies, stars Richard Carlson, Julie Adams (billed as “Julia”), and Richard Denning as scientists who travel up the Amazon River seeking rare fossils.  What they discover, instead, is a missing link between water and land animals: the gill-man, a.k.a. “the Creature.”  From there, things rapidly go downhill for the scientists as their expedition turns into a fight for survival against the titular monster.

The gill-man costume is a brilliant design--considered the best monster suit ever by many Monster Kid experts (including me)--created by Millicent Patrick, who was working at Universal in the studio of famous makeup artist Bud Westmore (who took credit for the design for nearly 50 years). (See link for some interesting facts and a great pic!)

My first encounter with the Creature was as an Aurora model kit in the early 1960s.  I wasn’t even old enough to hold an X-Acto blade, but I remember my dad helping me put the kit together and paint it.  It was a thing of beauty!

Not as cool, though, was finally seeing the Creature on TV several years later.  The part of the gill-man was played by two actors in the original feature.  (Two sequels, each with a different land-suit performer, followed.)  Ben Chapman, a strapping 6’ 5” actor, played the Creature on land, but it was the submerged gill-man--played by professional swimmer and underwater cameraman Ricou Browning--that really made an impression on me.

Working in the scaly skin-tight costume (and without an oxygen tank), Browning’s swimming made the Creature come alive.  As he chillingly mirrors Julie Adams by swimming on his back beneath her as she swims on the surface, you could well believe the Creature was a real, amphibious monster. 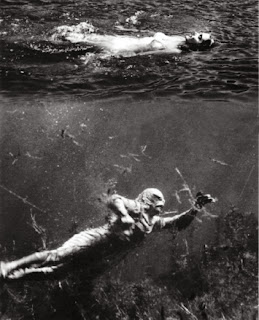 Browning’s gill-man seemed completely at home in the water.  He was fast, powerful, and graceful, and moved through the Amazon (really a lake in Florida) with an eerie twirling/undulating motion.  Later I learned that Browning, who had an amazing lung capacity, worked by taking a gulp from an underwater air hose and then holding his breath while swimming throughout the long takes.  In the film, though, it seemed as though he must be breathing through the gills on his neck, because surely no one could hold their breath that long.

As a kid, I thought the Creature was the coolest thing ever, and imitating his iconic swimming style helped me move from the dog paddle to a full array of aquatic strokes.  Even when swimming today, I will submerge and do a few yards of “the Creature Crawl” just to amuse myself.  It’s still fun to swim like Ricou.

My fondness for the Creature didn’t just end with swimming, though.  His films helped turn me into a lifelong Monster Kid and spurred my career as a fantasy-SF-horror author and artist.  Only Godzilla and the works of Ray Harryhausen have had a similar influence on my life and career.

That inspiration continues to this day.  Just last year, I featured a gill-man character--named Reeko in honor of Ricou Browning--in my second Tournament of Death novel.  And earlier this summer I ventured down to Chicago to attend a 3D showing of The Creature from the Black Lagoon (at least the third time I’ve seen the film in 3D on the big screen). 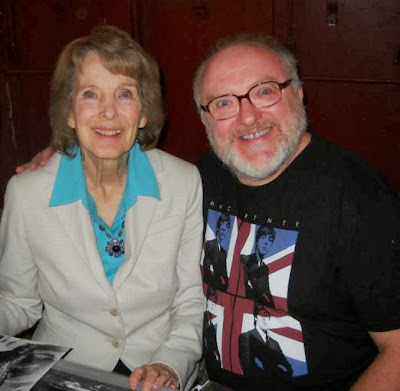 At that showing, I had the pleasure of meeting Julie Adams, who is astonishingly spry and lovely at age 87.  Amazingly, she still tours the country, accompanying prints of the movie, chatting with fans and doing interviews after showings of the film. 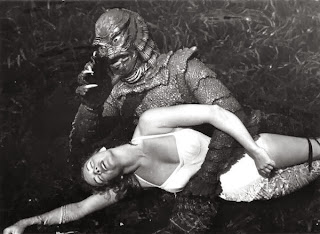 I was lucky enough to get an autograph and a picture with her.  She recently released her autobiography, The Lucky Southern Star: Reflections from the Black Lagoon.  If you get a chance, I’d highly recommend you venture out and meet her.

As for me, I’ll keep swimming, and the Creature will no doubt continue influencing my life and work. There are no gill-men in my current monster project, Daikaiju Attack (serialized free online every week), but who can say what the future might hold?

And, if I’m really lucky, by the time you read this, I will have secured a Ricou Browning autographed picture to go along with my Julie Adams.  Happily, he’s still swimming along at 83--and more power to both of them.

What the doctors say must be true: healthy living and bit of exercise--and a good monster movie--can do wonders for your health.

See you backstroking in the Black Lagoon!

Stephen D. Sullivan is the author of numerous books and stories, including Daikaiju Attack--www.daikaijuattack.com--and out now! The novelization and new script of the classic horror film White Zombie. (More details to come!)

Creature from the Black Lagoon (1954)
Revenge of the Creature (1955) - captured and sent to an aquarium, the gill man, after seeing another lovely, escapes and kidnaps her.
The Creature Walks Among Us (1956) -in this version, he's turned into an air-breather, and being unhappy, escapes again and wreaks havoc.
IMDB says there is a remake in the works but no information is given.

NEXT: Monster Week - The Mummy - Vampires - The Thing - Godzilla