Today, we welcome Renee Charles, author of the new zombie survival romance, Only Love Survives. She's having a contest and cool necklace giveaway, too, so keep reading! 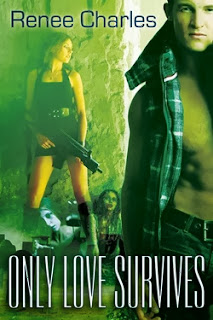 
Amidst an epidemic ravaging the world, all Megan Fletcher's hopes for the future lie in getting to Las Vegas where newscasts reported scientists were gathering to search for a cure for the modern plague. After rescuing her from a rooftop surrounded by Zombies, Sam Woods appoints himself her escort. While he knows she is determined to get to Vegas no matter the cost, he doesn't know her secret. And with his hatred of all things Zombie, she doesn't dare tell him the truth.

The more he kisses her, the harder it is for Megan to hide her growing feelings...and the bite-shaped scar. But Vegas is not the haven it was promised to be, and when Megan's immunity to the disease is discovered, she realizes her future and her heart belong to Sam, if he will trust her.

An idealistic school teacher and ex-corporate mogul manage to find love despite a looming worldwide catastrophe. Can their love survive while everything around them is dying? Will they learn that when facing the end of the world, Only Love Survives?

A storm that spelled danger flashed across Sam’s face. He advanced on Megan so fast, she backed up against the side of the Suburban. Planting a hand firmly on each side of her, he pinned her with his arms as well as his gaze.

“What I want? Are you so hard headed you can’t tell what I want?” He covered her mouth with his lips and crushed her clever comeback with an assault on her senses.

Megan pushed him, but he didn’t budge. Instead, he continued to kiss her until her heart raced and cheeks flushed with need. All resistance melted and she succumbed to the warmth of his embrace. Her arms wound around his neck of their own accord pulling him closer while her tongue sought his in a passionate dance, completely ignoring what her heart wanted.

When he finally broke away leaving Megan breathless and wanting so much more, Sam put his forehead to hers and watched her mouth like a drunk watches amber liquid poured into a glass. “You,” he rasped. “I’ve wanted you since I found you hanging from that damn roof, and all our little encounter in the river did was add fuel to the fire.”  (Read more at her website.)

** Be sure to comment! Check out the cool necklace giveaway!!