When I was younger, my sister and I used to watch MonsterVision.  There was a show we watched before that when we were even younger, but I can't remember what it was.  One of the featured films we saw happened to be the The Thing with Kurt Russell. 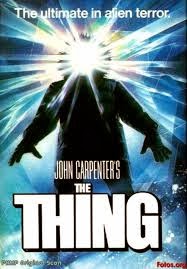 I remember being afraid and thinking I would have nightmares, but I couldn't stop watching.  Something about the film intrigued me.  Something made it fascinating.

It wasn't until I was in college that I discovered the 1982 version was a remake of a 1951 film called The Thing from Another World. 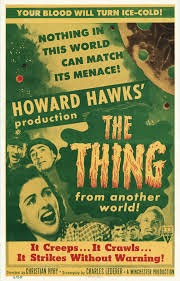 I had the pleasure of watching it in a sci-fi and horror film class through the English department.  The professor described the alien as a shape-shifting vegetable.  A carrot that could take on other forms.  Still, I really enjoyed that film, too.

About this time, I was collecting toys, and I really wanted the creature.  You can find more information about it here.  (FYI:  Aliens is one of my all-time favorite movies, and I own several of the toys from the film and have several tattoos, but that is a different blog post!) 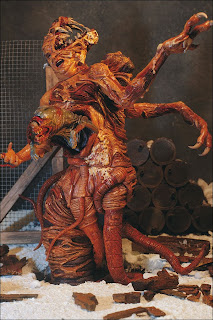 For some reason, I never got it.  (I still have all my toys, incidentally, I just don't have anywhere to put them!)

Then, in 2011, they came out with another version of The Thing. 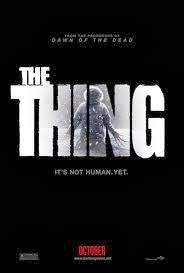 I watched it and enjoyed it, but it didn't give me the same thrill as the other films did.  Maybe by this point in time the story was overdone.  But I have to say, the creature was still freaking fantastic!

Monster Week - Creature from the Black Lagoon - The Mummy - Vampires - Godzilla
Posted by Pembroke Sinclair at 12:00 AM