Horror and Fantasy Titles for Halloween

It was a great time at the Racine, WI Barnes and Noble's Horrorfest last Sunday. I got to meet a great group of impressive writers and thought I'd introduce you as well to them and their work. (See links at end.)

(** Check out my ZOctober interview at My Book Addiction - sign in to win a Kindle copy of GIRL Z: My Life as a Teenage Zombie) 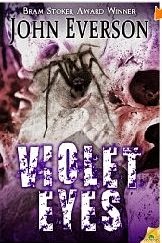 If you don't like spiders, stop reading, but if you do, you'll be missing out on one incredibly-creepy-read in Bram Stoker Award-winning author John Everson's latest (and seventh) book, VIOLET EYES, (Oct. 1, Samhain Publishing).

He said it was time to switch from the demonic horror he'd been doing… "So... spiders!," he said.

The small town near the Everglades was supposed to offer Rachel and her son a fresh start. Instead it offered the start of a nightmare, when an unknown breed of flies migrated through the area, leaving painful bites in their wake.

The media warned people to stay inside until the swarm passed. But the flies didn't leave. And then the radios and TVs went silent. That's when the spiders came. Spiders that could spin a deadly web large enough to engulf an entire house overnight. Spiders that left stripped bones behind as they multiplied. Spiders that, like the flies, sought hungrily for tender flesh... through Violet Eyes.

A sample line: ".. The bugs had been worse than usual this summer… Now he was hearing that buzz. It wasn't the buzz of tinnitus, but of thousands of wings…"   (Yikes!!) 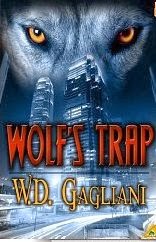 W.D. Gagliani had a good reason for choosing to write about werewolves instead of vampires when he began his series about Nick Lupo, a werewolf cop. The first book, WOLF'S TRAP, a Stoker-award nominee now re-released from Samhain Publishing, features Nick Lupo, a good cop--with the instincts of a great detective... or maybe a wolf.

Lupo has a lot in common with wolves, which is only natural considering he's a werewolf. He's battled the creature inside him for years, but now there's another predator in the area. A bloodthirsty serial killer is leaving a gruesome trail of victims, and it's up to Lupo to track him down and stop the slaughter. Will Lupo dare to unleash one beast to stop another?

He began writing about Lupo (never thinking it'd be a series) since "everything was vampires and I was just sick of vampires," Gagliani  said. "You get a sense that vampires just enjoyed being vampires. Larry Talbot (the werewolf in The Wolfman film) was just tragic. He didn't want to be the monster."

Gagliani admits finding a kinship with his character. "I always enjoyed the idea of him being unable to control his change," he said. "He's been a werewolf since he was a teen and he's only now (in his 40's) beginning to control it." 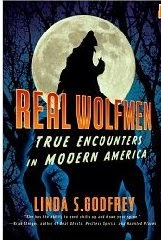 Noted nonfiction author Linda S. Godfrey  has tackled everything from Haunted Wisconsin, to Monsters of Wisconsin and written about other things unexplained. Now she delves into that favorite Halloween character, the werewolf, in her latest book, REAL WOLFMEN: TRUE ENCOUNTERS IN MODERN AMERICA.

For Godfrey, a reporter turned choronicler of the mysterious, it's as fun as writing fiction, but "the beautiful part is there is nothing I have to make up. These things are being reported by real people. These are reports of things real people claimed happened to them."

The book offers the definitive account of today’s nationwide sightings of upright, canine creatures – which resemble traditional werewolves – and a thorough exploration of the nature and possible origins of the mysterious beast. 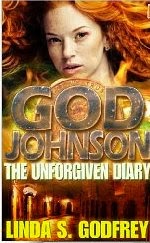 Godfrey also has written her first fiction novel, an urban fantasy with touches of other genres called GOD JOHNSON: THE UNFORGIVEN DIARY: Straight-laced wannabe actress Liberty agrees to be the sole disciple of a minor deity and Abe Lincoln lookalike oddly named God Johnson, in exchange for a fast track to world-hunger-fighting-super-celebrityhood. As Liberty tries to give him her heart – and a certain portion of her aura -- she breaks his Major Rule which is that humans shall not play god with other humans. He then must abandon her to the other lesser deities for their sport until she pays for her sin or dies.

By the time Liberty discovers what the gods really want from her, she knows that what she wants from God Johnson is worlds away from her original plan. She must either accept the considerable and attractive sacrifice God Johnson makes for her, or leave the natural world and create her own brand of do-gooder stardom as the glamazon goddess she has become. 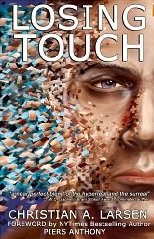 
The short story writer-turned novelist describes the book as "Breaking Bad without the meth and with a superpower" and tells the story of a dad who finds he suddenly has the power to walk through walls, also known as "phasing through matter."

In LOSING TOUCH, Morgan Dunsmore feels like everything is out of reach-a paying job, a healthy marriage, and even a good bowel movement. He tries to protect his family from his  anxieties, not to mention their financial burdens, but that just pushes them away even further. And in the middle of it all, he starts to lose his tangibility.

He may be able to walk through walls, but that ability comes with a price. He has to learn not just how to control it, but how to use it without anyone finding out, not even his family. He doesn't want to become a circus freak or government test subject while providing for his wife and kids, but there doesn't seem to be any honest work for a man who can secretly phase through solid matter. The temptations, on the other hand--the temptations are endless, and when he succumbs to the first, the rest begin to fall like dominoes... 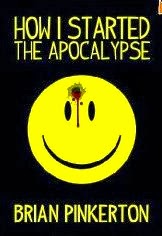 Brian Pinkerton still smiles when he recalls his weekly childhood trips to the library. "My mom was a high school English teacher," he said. "My favorite memory is going to the library every week and I'd come home with a stack of books. I always enjoyed the act of telling stories."

He's been writing novels for 10 years and as a George Romero  ("Night of the Living Dead") fan, wanted to write a zombie novel but as "the genre was overcrowded," he took a slightly different approach in his book, HOW I STARTED THE APOCALYPSE (Severed Press). Chaz Singleton is a lone zombie battling for survival against a hostile humanity.  He holds the fate of the world in his hands, whether he likes it or not. He is dead. He is angry. He is contagious. And he is hungry.

** And coming soon… HOW I STARTED THE APOCALYPSE, Book 2.

"I thought, what about having the poor zombie against humanity," he explained. So, in his book, his character Chaz, is "the zombie in the house and the people want to run him out of town." 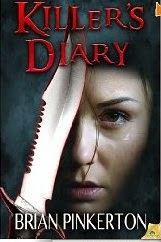 He also took a different approach in his writing in his new book, "KILLER'S DIARY, (July 2013, Samhain Publishing.), a psychological horror novel about a woman who finds a journal and realizes the man she's dating may be a serial killer.

"I always had a fascination with the true crime books," Pinkerton said, wondering, "what goes on in people's minds that they can do these acts?"

I also talked about my book, GIRL Z: My Life as a Teenage Zombie,  - the 2013 Young Adult winner of the Halloween Book Festival.

One of my favorite parts of writing about the main character, Becca, and her transformation into a part-zombie was creating some of the things she has to deal with in her new "life" like prejudice, bullying, feeling that she doesn't fit in... and there is the unsureness of just who she is and what she is becoming.

But she's also strong, knowing that she still has a role (helping protect her family), and perhaps even a future... with a good-looking part Z named Gabe.

But she's still a kid - with feet in both the present and the future... and no one really knows what is coming next.