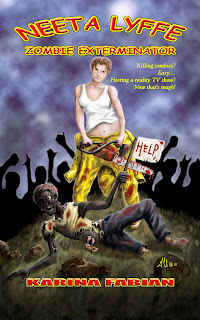 Neeta Lyffe, Zombie Exterminator looks at the zombie apocalypse in a different way--as fodder for a reality TV show, Zombie Death Extreme. It was such fun to build this world gone mad, but not in a World War Z way.  Instead, we have a limited number of undead, but unlimited number of bizarre reactions to the undead, from conspiracy theories concerning their origins to new occupations, like zombie exterminators, to exploitative television shows.  Among all of them, are the scientists who seek a cure, the origin, and in the meantime, better ways to kill them.

Enter the Zombie Extermination Research and Development Center, also known as ZERD.  A minor player in the Neeta Lyffe novels, ZERD looks for the best ways to re-kill the shambling undead.  It's a thankless job, and an unpopular one at that.  So, when they had a chance to get a little bit of an image-bump by hosting an episode of Zombie Death Extreme, they jumped at the chance.  Of course, nothing touched by Hollywood Prime Time really reveals its true image.  Ah, but you'll see...