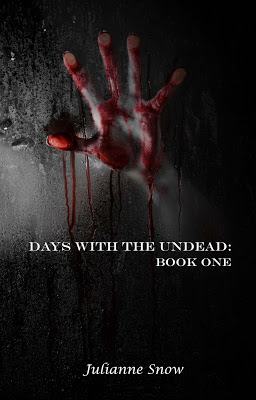 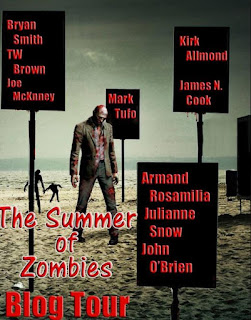 Welcome to part of the Summer of Zombies Blog Tour  on Facebook featuring nine zombie authors. (No they're not zombies, but they write about zombies.)

Today we welcome Julianne Snow, author of Days with the Undead: Book One who is letting her character Julie do the talking today.

About DAYS WITH THE UNDEAD: Book One:

It’s a journal of survival.

Five people set out to escape the Undead who have risen too close to home. Join their emotional and physical struggle on the third day after the awakening of Brooks VanReit, as they are recorded from the point of view of Julie, a former pathologist and part-time survivalist.

Each entry is geared toward helping those who want to help themselves and maybe give a few that don’t a swift kick in the ass. Join our group of survivors on their journey through these Days with the Undead.


** Be sure to comment here on the blog to win 1 of several copies of Days of the Undead: Book One. **


Here's Julie from Days with the Undead:

What do you want from life?
I just want to survive. It’s simple really. Right now we’re on the move, trying to stay ahead of the Undead. It would be nice for things to return to some sort of normalcy, but we all know that what we’re dreaming is a pipe dream. Instead we’re faced with days upon days of struggle and that’s only if we don’t succumb to the hordes that surround us daily.

If you were granted three wishes, what would you ask for?
A world without the Undead, a hot shower, and a soft, warm bed.

What three things would you take to a Desert Island?
Unfortunately, not even the islands are safe… I’d want my handgun, an endless supply of ammo and a crowbar for when close quarters negate the use of a gun.

How do you fall in love? At first sight? Over a long period?
I feel in love with my husband at first sight. He’s dead now, however. At some point I may think about love again, but for the moment, my energy is directed at helping my group to survive.

How do you decide if you can trust someone? Experience with others? With this person? First impressions? Intuition? Do you test the person somehow? Or are you just generally disposed to trust or not to trust?
By their actions. If they act in good faith in the situation where you first meet them, you can pretty much rest assured that they are someone to that can be trusted. It does take only a single moment of stupidity or shiftiness to initiate a sliver of doubt in my mind. We don’t live in a world where you can make mistakes or carry dead-weight.

When you walk into a room, what do you notice first? Second?
The first thing I look for is the presence of any of the Undead. Once I’ve ascertained there are none of them inside, I look for all points of egress and ingress. It’s best to know where they may come at you from and where there’s an exit should you need to escape.

When you walk into a room, what do you expect people to notice about you?
That I’m a no bullshit kind of woman with a plan and the means to get it done. It’s fairly simple; I have a scientific background and I’ll use that when I can to get me from one day to the next.

Describe yourself to me.
Even though I’m a strong woman, I still see myself as an unlikely role model for others. I have been thrust into a position of authority through necessity and at times, it can certainly seem like it gets to me. I’m human just like everyone else and I have my weak moments. My scientific background helps me to survive, but even that can only get my so far. I need to rely on all of my strengths and work on counteracting my weaknesses – it’s the only way.

What's the worst thing you've ever done? Why?
I killed what was left of my husband’s body. Enough said.

What are you most afraid of?
Becoming one of them…

How do you feel about your life right now? What, if anything, would you like to change?
Right now, life sucks and it’s glorious. I’m still alive and that cannot be taken for granted, but I exist in a world that is hard to live in. If I could change anything, it would be to go back to the moment when it all started and end it shortly after it began. It would have been simple to end it all back then…

What makes you laugh out loud?
At the moment, it’s the pure joy that Lily and Liam exude. Even in a world full of the Undead, these two still find ways to be children and they never let a moment pass where being a kid again is a possibility. It’s as beautiful as it is heartbreaking.

What do you consider your greatest achievement?
Honestly, at this point it’s the fact that I’m still alive…

What is your idea of perfect happiness?
Perfect happiness doesn’t exist. As a realist, I would only hope that the world can stop existing and start living again. That and a world without the Undead.

What is your current state of mind?
I won’t lie to you – I’m frazzled, confused, diligent, resolved, and tired.

What is your greatest fear?
My greatest fear is that we’ll never rid the world of the dangers of the Undead. We have no idea what has caused the situation, so we really cannot even fight our foe intelligently. All we can do is continue to fight the symptom and hope that we can eradicate the cause in the long-run.

What do you most value in your friends?
The ability to use a firearm. The ability to assess situations and act accordingly. The fact that they always have my back. Their mere presence is something that I value as I have no desire to navigate this world on my own.

Which words or phrases do you most overuse?
Probably the word Undead, but I just cannot bring myself to call them the ‘Z’ word…

If you could change one thing about yourself, what would it be?
My physical strength. While I am strong, I would love to be stronger. As it stands, each and every time I have to take down one of the Undead with pure brute strength, I find myself tired after each blow. That tiredness scares me. It worries me that at some point, in a situation not stacked in my favour that I will lose the strength in my arms and be unable to continue. That’s a scary, sobering thought.

Which living person do you most despise?
I don’t think I despise anyone living. There have been a few people we’ve come across that I wouldn’t hesitate in killing should the opportunity arise, but that is born out of a need for retribution. If you hurt one of the people I love, I won’t hesitate in hurting you back. It may seem callous and cold-hearted but this world has a way of changing you. I’d gladly give the shirt off my back to a person who needed it and who was willing to help themselves survive, but when you think that taking what isn’t yours is the correct path, my generosity begins to run thin.

What is your biggest regret?
With the world the way that it is, that’s a very hard question to answer. I have felt regret for a few stupid things in the past – the perm I let my mother give me in ninth grade the day before picture day, kissing Charlie Stoles on a dare, and not taking enough study breaks in university in order to have fun. But those things pale as time goes on, especially now.

I would like to add that I wish I had been able to go to my parents and make them leave when all of this occurred. Just to know they’re safe would mean the world to me at this point.

What do you regard as the lowest depth of misery?
The lowest depth? You can easily see it on the faces of those locked in batter with the Undead. Sometimes the bodies you’re so intent on killing wear the faces of those you once loved, still love. To know that you cannot save them makes a part of you die each time you have to deliver the second death to them.

What is the trait you most deplore in yourself?
My own insular thoughts. Being able to deal with a lot on your own can certainly he helpful in certain stressful situations, but there are times when you need to get what you’ve seen out of your head in order to be able to move on. I have a hard time letting go of the things I have seen.

How would you like to die?
In my sleep. Just to fade away into the darkness of nothing. To not know my death was coming and that it wouldn’t be painful. To have my last thought be a dream (hopefully not a nightmare) and not the panicked thought of becoming one of them.

If you were to die and come back as a person or thing, what do you think it would be?
It certainly wouldn’t be one of the Undead. Altruistically, I’d like to say that I would love to come back as the cure for what has allowed the dead to rise again, but it’s not likely that will ever happen. If time were not a factor, I would love to come back in a time before the Undead, to have lived my life fully and free from their threat. 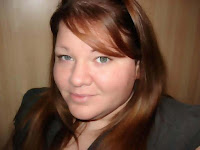 Watching Romero's Night of the Living Dead at the tender age of six solidified Julianne’s respect for the Undead. She's since been preparing herself for the (inevitable) Zombie Apocalypse. While classically trained in all of the ways to defend herself, she took up writing in order to process the desire she now covets: to bestow a second and final death upon the Undead. As the only girl growing up in a family with four children in the Canadian countryside, Julianne needed some form of escape. Her choice was the imaginations of others which only fostered the vibrancy of her own.

Days with the Undead: Book One is her first full-length book, the basis of which can be found in her popular web serial of the same name. Along with many zombie shorts published on her blog, she has a story in Women of the Living Dead as well as two zombie pieces; a standalone short and a collection releasing the summer of 2013. Julianne’s second novel in her Days with the Undead series will also be released in 2013. Stay tuned!