With Halloween coming, we're celebrating MONSTER WEEK!  here on the blog. We'll be sharing about a few of our personal monster movie favorites. So, have fun and tell us about some of your must-see monster movies that kept you up at night!

And... The Coffin Hop Blog Tour continues!
Comment here daily through Oct. 31 to win a copy of the new DEATH BY DRIVE-IN Anthology (& buy a copy to benefit literacy! ) New posts here daily to 10/31!
COFFIN HOP runs October 24-31 at WWW.COFFINHOP.COM  with more than 75 artists and authors, partying it up, bringing the treats and the tricks to an online audience of thousands. 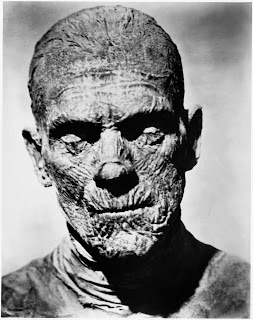 With the discovery of King Tut's tomb in 1922, Egyptian motifs and symbols influenced almost everything in coming years, from fashion and makeup, to home furnishings and entertainment. Rudolph Valentino thrilled women nationwide in the Twenties as "The Sheik."

In the Thirties, gangsters, Mae West and goofball comedies like the Marx Brothers' "Duck Soup" gave people in the midst of the Great Depression a sense of escape from real life and something to laugh about.

Then came the monsters. 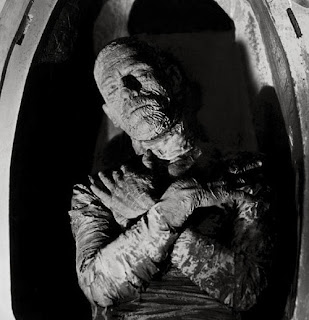 Just as fears of nuclear bombs and Russian invasions spawned a plethora of giant monster movies in the 1950s, so the Depression played a role in the growth of classic monster movies. With society already in upheaval, many facing hardships and thousands out of work (sound familiar?), monsters offered a way to escape. They were something that could be feared and maybe controlled. The monster could be vanquished!

For Universal studios, it began a golden age of movie monsters and made stars of leading actors like Bela Lugosi in Dracula (1931), and Boris Karloff in Frankenstein (1931) and The Mummy (1932).

To someone like me who loved the classic monster movies and had dreamed at one point of being an archaeologist before choosing the "more practical" career of journalist and writer, The Mummy became one of my favorite early horror films. Ancient Egypt was fascinating - and this movie made it even creepier! Growing up, I loved reading the E.A. Wallis Budge books like The Egyptian Book of the Dead

and even learned to do my name in hieroglyphics. (No, I didn't do any curses.) I still love reading about my favorite Egyptian Queens, Cleopatra and Nefertiti. Another favorite old book and one of the best historical novels I've read about ancient Egypt involves a man who worked in the embalming rooms and became physician to Pharoah Akhnaton - The Egyptian by Mika Waltari

The Mummy movie, of course, had all the perfect components—a love story gone wrong, a great character actor and an Egyptian setting. 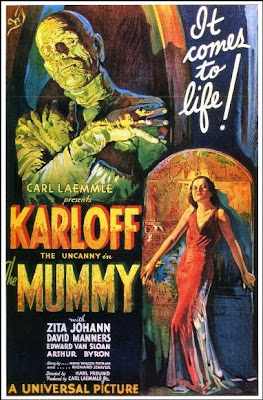 In The Mummy, Boris Karloff is the priest who dares to love a princess and for his punishment is entombed alive. The tomb is discovered in 1921 and when a scroll he is buried with is read aloud by an expedition member, the mummy Imhotep is brought back to life. Disguised 10 years later as a modern Egyptian, he attempts to reunite with his lost love, now reincarnated into a beautiful young woman played by Zita Johann. 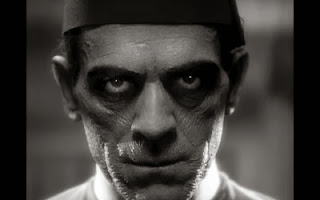 Despite Karloff having only a few scenes wrapped in bandages, which was supposedly a long and uncomfortable process, even without the wraps, who can escape the scary and mesmerizing look from those eyes? (I admit I'll have to watch this again as I keep wondering, how does he go from being a mummy into disguising himself as someone else?) 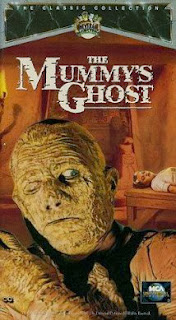 Karloff again revisits the mummy character, this time as a professor and Egyptologist, in The Ghoul, (1933). Called the first British horror movie of the sound era, he plays a Professor-Egyptian artifacts expert who insists a special jewel be buried with him. When the jewel is stolen, he rises as a mummy to seek his revenge.

Of note is that another classic monster movie actor, Lon Chaney Jr. steps into the role as Kharis, the living mummy in the 1942 film, The Mummy's Tomb, and the sequels, The Mummy's Ghost (July 1944) and The Mummy's Curse (Dec. 1944). The mummy was also the main character in a number of little-known short and silent films prior to the 1920s. 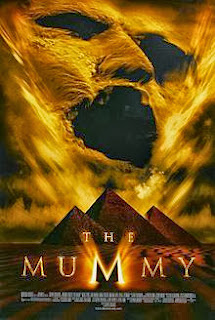 Then, of course, there was the 1999 remake of The Mummy starring Brendan Fraser. The adventure film (which I liked) became a kind of Mummy/Raiders of the Lost Ark with neat special effects (the bugs were the creepiest.) It follows up with The Mummy Returns in 2001 and The Mummy: Tomb of the Dragon Emperor (2008). It later spun off into another series, The Scorpion King. Of note is that author Max Allen Collins wrote novelizations of The Mummy movie.

But millions of dollars and modern special effects can never replace the truly creepy stare and unique character that Boris Karloff brought to the original film. That was what acting was all about.


Here are some of the better known mummy movies: 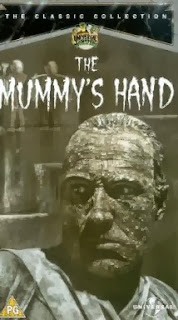