Digging up a zombie

Winter's a-coming, and soon, we'll be seeing snow.  Last year, I started a story about zombies on skis.  Real life got in the way, and I didn't get it finished, though it's on my list.  (You know the list I'm talking about, right?)  Anyway, I thought I'd share with you one of my favorite scenes, where a hunting dog finds the prize of a lifetime. 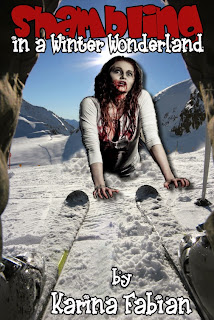 Hambone bounded through the snow, the wide pads of his stubby legs leaving heavy footprints.  He struggled up the snowdrift and paused, mouth open and panting, his breath making tiny clouds.  His ears dragged in the snow, and he shook them, annoyed at the cold tips.  He could hear his owner calling his name, but he ignored it.  There was a smell!

He raised his head, seeking the strongest scent.  The air stung his nose.  Cold air brought the best smells, and this one was strong and new.  What could it be?  It was kind of people and kind of rotten hamburger…  Oh, he had to know.

He stretched out his nose.  It was close, maybe even under the snow, close.  He moved further up the hill, sniffing, ignoring the exasperated cries of his master.  He always came back, and usually with something new and interesting to present.  The Master would put it on the Connie’s desk and laugh while she shrieked.  The more she shrieked, the better Hambone’s reward.  He’d get something grand this time, for sure!

He heard another sound, a low moan.  Aha!  Found it!  He tilted his head back, baying, and was rewarded by a sharp, commanding call of his name.  Now the Master knew.  He ignored the call but galumphed toward the other sound.  The smell came from that direction.  The snow moved.  He paused, head tilted, then perked.  Something blue was under it.  Blue and moving.  Toy!
With scurrying legs, he dug up the prize and grasped it with his teeth.  It resisted at first.

Tug-of-war!  Hambone loved tug-of-war.  He braced his legs and pulled.  The toy’s groaning turned to growls, and he growled back.  Mine, mine!

A rip and a wafting of spoiled hamburger smell, and it was his.  Just in time, too—the gentle snowfall had started to get icy.  Now that he had solved the mystery of the smell and won his prize for the Master, he wanted to curl up in front of the warm fire and get belly rubs.  He turned his back on the groaning, spread his legs, and piddled so all the world would know of his victorious presence.

He trotted back toward his master, his mouth full of his prize—a partly rotted arm in a blue jacket sleeve, its blue-gloved fingers curled with the middle one extended in a universal symbol of anger and defiance.

Wouldn’t his master be proud?
Posted by Karina Fabian at 12:00 AM